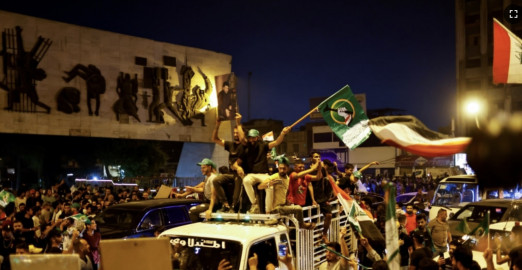 The White House extended congratulations to the Iraqi government Tuesday for its mostly peaceful election, while mentioning the certification of the results was still pending.

"Once the final results are certified, we hope the new council of representative members will form a government that reflects the will of the Iraqi people.”

The party of cleric Muqtada al-Sadr was the largest vote-getter in Iraqi parliamentary elections, according to initial results released Monday.

A count based on partial results shows the Shiite Muslim cleric has won more than 70 seats in the 329-seat parliament.

Al-Sadr's party said it won 73 seats, increasing its seat count of 54 and giving it a large influence in government formation.

Top European Union diplomat Josep Borrell said if there are claims of irregularities in the election, then they need to be dealt with “promptly though available procedures.”

Shiite groups have dominated Iraqi politics since the fall of Sunni leader Saddam Hussein in 2003. They will continue that trend if the final vote count shows al-Sadr's party is the winner.

Hundreds of al-Sadr's supporters, with flags and posters of him, celebrated his front-runner status Monday night in Baghdad's Tahrir Square, according to Reuters.

Al-Sadr is a populist religious leader known for commanding an insurgency against U.S. forces after the 2003 U.S. invasion that started the nearly nine-year war in Iraq.

He claimed victory in a live speech on state television Monday and promised a nationalist government without foreign interference, Reuters reported.

Sunday's vote was marred by a record low turnout for parliamentary elections, at just 41%, according to Iraq's electoral commission. That is below the 44.5% recorded in 2018, the previous all-time low.

The election was held months ahead of schedule in response to youth-led protests against corruption and faltering public services. The protests brought tens of thousands of people onto the streets in late 2019 and early 2020, with demonstrators calling for reforms and new elections.

However, a police crackdown on the protests, which left nearly 600 dead, along with widespread disillusionment about Iraq's political elite, led many protesters to later call for a boycott of this year's elections.

Sunday's vote was held under a new law making it easier for independent and reform candidates to be elected, including by making voting districts smaller. In practice, however, powerful parties were still best able to mobilize supporters under the new rules.

The election results are expected to largely maintain the country's traditional political blocs.

However, since no one party won a majority of seats in parliament, negotiations to choose a prime minister to run the government are expected to take weeks or even months.