‘Matiang’i and Mucheru are partisans, not fit to superintend elections,’ Ruto allies say 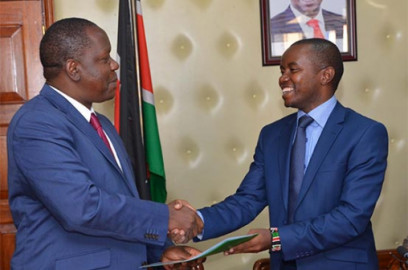 Politicians allied to Deputy President William Ruto have insisted that Cabinet Secretaries Fred Matiang’i and Joe Mucheru should not be involved in any electoral processes arguing that the pair are partisans.

According to the DP’s allies, Matiang’i and Mucheru have already made their political allegiances known as such there is no guarantee that they will uphold the fundamentals of a free and fair election process next year.

“CS Matiang'i and CS Mucheru have made a public decaration about the candidate they are going to support in 2022 and therefore they do not have the competence to superintend elections next year because they are partisans,” Muranga Senator Irungu Kang’ata said.

"IEBC is independent, you have no business calling Mucheru and Matiangi to a meeting when it is in public domain that they have already taken sides,” Mathira MP Rigathi Gachagua added.

In order for next year’s elections to be free and transparent, Kang’ata argues that Matian’gi and Mucheru should be completely uninvolved in the electoral process.

“We want to tell the two ministers to step aside and allow non-partisan independent body to conduct elections because once that happens Kenyans are going to have faith in the electoral system,” Kang’ata said.

On his part, Gachagua called on IEBC chairperson Wafula Chebukati to write a letter to President Uhuru Kenyatta explaining why the pair should not be involved in overseeing next year’s elections.

“They are not independent to plan elections so we want to ask Chebukati to send a letter to the president and outline clearly the mandate the IEBC as an independent institution and why the IEBC cannot work with ministers who have clearly taken sides  and become campaigners of Raila Odinga,” said Gachagua.

“He must tell the President to move these people from those dockets if he must keep them in the cabinet for the purposes of the election.”