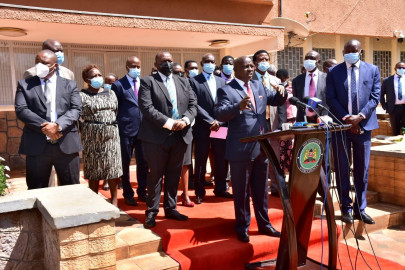 Nyeri Governor Mutahi Kahiga has laid off two of his County Executive Committee (CECs) members during a reshuffling of his cabinet just months before the general election.

The said members had been appointed by his predecessor Dr. Wahome Gakuru.

Kahiga at the same time fired a warning to County officers engaging in politics asking them to step down by next month.

“Anyone in government who wants to leave should write to the county now so as they are able to do so by February as the law requires," said Kahiga while addressing a press conference on Wednesday.

Kahiga who had sent two CECs on compulsory leave nearly two months ago fired one while the other, Kwai Wanjaria who was the acting CEC for planning and health dockets left the county government.

Similarly, the governor dismissed the move as being political, saying he wanted to ensure there is a smooth transition and proper government operations at the county in this election year.

“The health docket that has been a thorn on the county government's flesh will be headed by the acting Finance CECM, Robert Thuo,” he said.

The two positions have however been advertised by the county government of Nyeri.

In addressing the challenges of Matatu operators and traders in the region, Governor Kahiga said the relocation of traders and Matatu operators to a new bus park outside the town is the county’s priority.

“The relocation under Planning Department is set to take place before March 2022,” he stated.