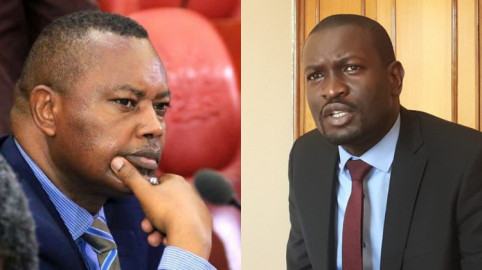 Sifuna, in a Tuesday interview with Citizen TV, said it will be difficult for the DCI boss to execute his duty with a jail term hanging over his head.

“It would be difficult to execute duties of any office from jail, it is not possible, even physically, for him to continue serving as DCI,” noted Sifuna.

“The complication of the law is such that with such a conviction hanging over you, the question of your suitability to hold that office also comes into play,” he added.

Sifuna further stated that Kinoti must surrender to the Kamiti Maximum Prison where he was sentenced to be jailed and then appeal later if he so wishes.

“We must encourage this culture that we are a state governed by the rule of law, and obedience of court orders is in accordance with the rule of law. The responsibility is to obey the law first and then if you have issues with it there are always channels of appeal,” Sifuna noted.

He, however, noted that Kinoti’s woes could have been avoided had he not ignored the court’s directive in 2019, where Kinoti was ordered to return businessman Jimi Wanjigi’s confiscated firearms.

“I wish the matter had been dealt with better; immediately the court order was issued, the firearms should have been returned to the businessman.”

In a ruling delivered on Monday, Justice Anthony Mrima dismissed Kinoti's claims that he was not the legitimate keeper of firearms when he delivered the verdict, saying that the matter of gun custody had previously been dealt with in a previous judgment.

Although the DCI boss stated that the firearms were in the hands of the firearms licensing board, the Judge stated that no evidence of how they were turned over to the board had ever been presented in court.

The DCI boss was on November 18 sentenced to four months at the Kamiti Maximum prison for contempt of court.

He had been given 7 days to surrender to authorities, within which Attorney-General Kihara Kariuki filed a petition to have Kinoti's sentence suspended on grounds that the contempt charges against the DCI were misdirected because the Firearms Licencing Board is the custodian of firearms.

In 2017, police seized seven firearms from the businessman's home in Malindi.

In June 2019, Justice Chacha Mwita ruled that the State acted irrationally by seizing Wanjigi's firearms while he still had a valid license.

The DCI boss had been given 30 days in early 2021 by the High Court in Nairobi to return Wanjigi's firearms, as ordered in 2019.

The deadline for the DCI to comply with the orders was March 25, 2021.

After DCI failed to return the firearms, Wanjigi filed a contempt of court proceedings suit, seeking to have them committed to civil jail.