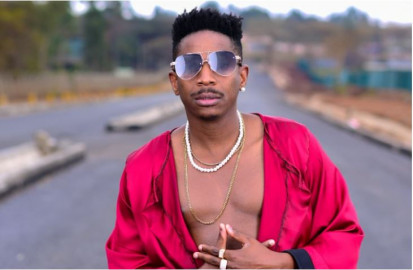 After focusing his attention on Kenyan musicians for the past week, comedian Eric Omondi has now turned his attention to the plight of Kenyan comedians.

Eric Omondi, in a long Instagram post,  on Monday, referred to his fellow Kenyan comedians as a group of people who lack direction, innovation and vision, a post that seems similar to when he attacked Kenyan musicians last week.

Eric went on to say that, despite Kenya's population of 46 million people, no Kenyan comedian has achieved international success apart from himself.

"I dont even know where to Start from…Mpaka naskia nauma na Kichwa already. If there is a GROUP of people in this COUNTRY that lack DIRECTION, INNOVATION and VISION then it has to be our COMEDIANS. ZERO EFFORT!!! The Most BORING BUNCH of Entertainers in this COUNTRY!!! In a COUNTRY of 46 MILLION People HAKUNA Comedian hata Mmoja ame go INTERNATIONAL.”

According to the self-proclaimed ‘President of Comedy,’ Kenyan comedians have not made the effort to upgrade their quality both on writing jokes and on the production of shows.

Eric claims that the whole country now depends on him as a comedian to do everything from going international to getting endorsements to even handling societal issues in the country.

The C.E.O of Big tyme entertainment added that he is tired of holding the whole industry down by himself, while also calling on a new generation of comedians to revive the industry.

“If you CAN'T MATCH UP!!! If you CAN'T RAISE the FLAG🇰🇪🇰🇪🇰🇪. Then dont call yourself A COMEDIAN na MTOKE HAPA NAIROBI MURUDI USHAGO!!! How can ONE PERSON CARRY A WHOLE INDUSTRY. AYAM TAYAD, PUNDA IMECHOKA!!! We need a NEW CROP/GENERATION of COMEDIANS.”