A man has spent 43 years in prison for a triple murder. He says he's innocent and prosecutors agree 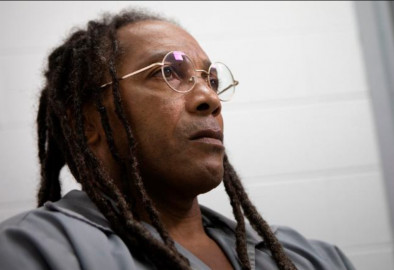 Kevin Strickland is pictured in an interview room at Western Missouri Correctional Center, in Cameron, Missouri, on Nov. 5, 2019.

A Missouri man who has maintained his innocence in a triple murder got an opportunity to testify at a three-day hearing that could lead to his release after serving 43 years in prison. That decision is now in a judge's hands.

Kevin Strickland, 62, has spent 43 years at Western Missouri Correctional Center in Cameron, Missouri, after he was convicted of one count of capital murder and two counts of second-degree murder in a triple homicide. He received a 50-year life sentence without the possibility for parole for a crime he says he wasn't involved in -- and Jackson County Prosecutor Jean Peters Baker agrees.

Four people were shot in Kansas City, Missouri, on April 25, 1978, resulting in three deaths, according to CNN affiliate KSHB. The only survivor of the crime, Cynthia Douglas, who died in 2015, testified in 1978 that Strickland was at the scene of the triple murder.

Douglas survived the shooting after sustaining a shotgun injury and told police that Vincent Bell and Kiln Adkins were two of the perpetrators. But she did not identify Strickland, who she knew, at the scene until a day later, according to KSHB, after it was suggested to her that Strickland's hair matched Douglas' description of the shooter. Douglas claimed that her initial failure to identify him was due to the use of cognac and marijuana, according to KSHB.

But over the past 30 years she said that she made a mistake and falsely identified Strickland. According to KSHB, Douglas made efforts to free Strickland through the Midwest Innocence Project.

The two assailants that Douglas identified at the scene both plead guilty to second-degree murder and each ended up serving about 10 years in prison for the crimes, according to Strickland's attorney, Robert Hoffman.

"Most of us have heard the famous quotation that 'injustice anywhere is a threat to justice everywhere,'" Peters Baker said in an online statement posted in August. "Kevin Strickland stands as our own example of what happens when a system set to be just, just gets it terribly wrong."

On Monday, during the first day of an evidentiary hearing -- which involves eyewitness testimony given under oath -- Strickland's legal team presented evidence and arguments to exonerate him. Strickland also testified.

If Strickland is released, his confinement would become the longest wrongful imprisonment in Missouri history and one of the fourth longest in the nation, according to The National Registry of Exonerations.

"I wasn't about to plead guilty to a crime I had absolutely nothing to do with," Strickland said during Monday's hearing, according to CNN affiliate KCTV. "Wasn't going to do it...at 18 years old, and I knew the system worked, so I knew that I would be vindicated, I wouldn't be found guilty of a crime I did not commit. I would not take a plea deal and admit to something I did not do."

In 2020, there were 129 exonerations nationwide. Defendants exonerated last year lost a total of 1,737 years behind bars, an average of 13.4 years per exoneration, according to a report from The National Registry of Exonerations. And 30% of wrongful convictions in the registry's database can be traced back to mistaken eyewitness identifications.

The hearing concluded Wednesday with the judge saying he will make a ruling in a timely matter, Michael Mansur, director of communications for prosecutor Jean Peters Baker, told CNN.

"We cannot predict the court's timing in making a ruling," Hoffman told CNN Thursday. "But we do believe the judge understands and appreciates the importance of a prompt decision in a case like this, and we expect he will rule as promptly as he reasonably can."

Countless efforts calling for his release

Over the past year, there have been several efforts calling for Strickland's release.

In May, a petition to the Missouri Supreme Court for his release was filed with an accompanying letter detailing results of an investigation by the county prosecutor's Conviction Integrity Unit, a group that reviews post-conviction claims of innocence where credible evidence of innocence that was not known at the time of conviction exists.

"Based upon the amount and quality of the evidence available today, this office would not charge Mr. Strickland with any crime," the letter said. "Reliable, corroborated evidence now proves that Mr. Strickland is factually innocent of the charges for which he was convicted in 1979."

According to the letter, "In the interests of justice, Mr. Strickland's conviction should be set aside, he should be promptly released, and he deserves public exoneration."

In May, Peters Baker was joined by Strickland's attorney and the Midwest Innocence Project to present evidence that has surfaced since the wrongful conviction, according to court documents. But in June the Missouri Supreme Court declined to hear Strickland's attempt to exonerate himself.

Later that month, Missouri Gov. Mike Parson released a list with 36 people who were pardoned by him, but Strickland was not one of them.

"It's pretty easy on the outside to say 'Hey, he's innocent,'" Parson told KSHB in June. "I don't know whether he's innocent or not. I don't. Other than the facts I read, and then you have to determine 'Yes, this is something we should look at.' We did, in great lengths."

CNN has reached out to Parson's office.

Attorney General Eric Schmitt said he's convinced Strickland is guilty and argues his conviction should be upheld, according to CNN affiliate KMBC.

CNN has reached out to the Missouri Attorney General's office, but they declined to comment on the ongoing litigation.

Schmitt's office said that Strickland's trial was fair and constitutional and has filed other motions challenging other pieces of evidence, according to KSHB. Strickland's initial trial produced a hung jury and the second trial resulted in the conviction that ultimately placed him in prison.

"His first trial resulted in a hung jury, with the sole Black juror refusing to convict," Hoffman said. "Unfortunately, in his second trial, which was to an all-White jury, he was convicted of capital murder and sentenced to life in prison with no possibility of parole for 50 years."

"As a result, Mr. Strickland has spent his entire adult life in prison, for a crime that he did not commit," he said.

On August 28, a new Missouri law opened the door for prosecutors to file a motion to vacate or set aside a judgment at any time if they have information that a convicted person may be innocent or may have been erroneously convicted.

"Upon the filing of a motion to vacate or set aside the judgment, the court shall order a hearing and shall issue findings of fact and conclusions of law on all issues presented," the law says. "The attorney general shall be given notice of hearing of such a motion by the circuit clerk and shall be permitted to appear, question witnesses, and make arguments in a hearing of such a motion."

Previously, Missouri didn't have a legal route for prosecutors to take in wrongful conviction cases, according to the Equal Justice Initiative, a nonprofit providing legal representation to people who have been illegally convicted, unfairly sentenced, or abused in state jails and prisons.

"The newly-enacted statute in Missouri that allows this proceeding requires the judge to consider a very large volume of written material from the original trial and from prior habeas proceedings, so there is much more work for the court than just presiding over the hearing that took place this week," Hoffman said.

"The Missouri General Assembly and Gov. Parson deserve credit for creating a new legal avenue for a local prosecutor to seek relief," Peters Baker said in an online statement in August. "Making it possible for an officer of the court to stand before a judge and argue to correct a grave wrong is a system of justice we can all stand behind."