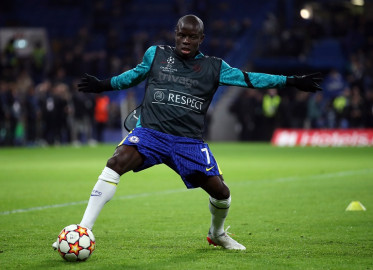 N’Golo Kante has started only 25 of Thomas Tuchel’s 53 games as Chelsea boss, but the Chelsea manager insisted that the 30-year-old midfielder was not slowing down with age, calling him “superman.”

Kante has already missed games due to COVID-19 and a groin injury this season and has failed to feature in Chelsea’s squad since injuring his knee in a 4-0 win over Juventus in the Champions League in November.

“We don’t have the feeling that it is about age (and) he takes longer. He is, in general, a careful person, he takes care of his body and doesn’t take risks,” Tuchel told reporters ahead of Chelsea’s midweek fixture against Zenit St Petersburg.

“I think he is superman. He is the guy who makes the difference, the guy everybody in the whole world wants in his midfield.”

Tuchel added that Kante’s recent struggles with fitness were down to accidents, and not indicative of a more serious issue.

“We built him up after his last injury. We had an accident, this can happen,” Tuchel said. “This is not related to age or to overload, simply an accident during the match. Of course, we miss him a lot.”

Chelsea have qualified for the Champions League’s knockout stages and are tied on 12 points with Juventus at the top of Group H.