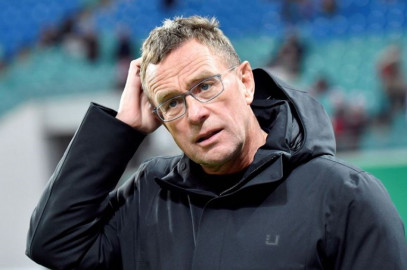 Ralf Rangnick, set to become Manchester United's interim manager, heads to Old Trafford with a reputation for 'pressing football' but it is almost certainly the German's vast experience of coaching and team-development that is the real attraction for the club.

The 63-year-old will be in charge of United's first team until the end of the season, but is also agreeing to a two-year role as a consultant - a detail which gives a strong clue as to what United are hoping to gain from the former RB Leipzig coach.

In terms of trophies, Rangnick's record as a coach is relatively modest - a couple of domestic Cup wins with Schalke 04 and a second division league title with Hannover 96 - but his reputation and significance in German football is far more impressive.

High-energy, hard-pressing, relentless, aggressive football is the trademark 'Rangnick' style and it is one that has many admirers.

"If you play that once, you will never want to play a different way of football, because it’s so exciting, so entertaining," said former Leipzig coach Alex Zorniger.

United's squad, while perhaps not best suited to a full-on, total pressing style, would certainly benefit from some fresh tactical input.

But it is the German's work in finding and developing players, coaches and focusing football operations where they might find the most value.

His work at Leipzig in particular focused on using cutting-edge performance training, data, sports science and a recruitment strategy purpose built to the style of play to which the club was committed.

A similar approach was adopted across the Red Bull group of clubs, including Salzburg in Austria and New York Red Bulls in Major League Soccer. Rangnick was, in 2019, head of sport and development at Red Bull with responsibility for all three of those clubs.

Sources at United say football director John Murtough, who targeted Rangnick for the club following the dismissal of Ole Gunnar Solskjaer on Sunday, has long admired the German's work.

Rangnick has not coached for over two years, announcing in July that he was setting up a company focused on 'club building', taking up a role with Lokomotiv Moscow as head of sports and development.

United have been doing plenty of 'club building' themselves, but could gain from some analysis and focus on how they might operate better.

During Solskjaer's three years at the club, United recruited some key personnel for the academy and in data, sports science and on the coaching staff. Rangnick could offer some valuable insight into how to get the best out of the talent that has been assembled.

In addition, United's executive vice-chairman Ed Woodward is due to leave the club in the coming months with group managing director Richard Arnold taking his place in the chain of command.

Arnold, whose experience is with the business side, may feel it helpful to have a knowledgeable football man like Rangnick working at the club while he transitions to his new, broader role.

His immediate task though is short-term focused - to get United performing on the field and Liverpool boss Klopp expects he will have an impact.

"He's done a lot of different jobs in football, but his first concern was always being a coach, being a manager, and that's what his best skill is."

"United will be organised on the pitch. That's not good news for other teams."

United must also find a new permanent manager to take over at the end of the season and Rangnick, with his extensive knowledge and contacts, is well placed not only to advise on the best choice but to help recruit them.

That may not be necessary though if his own six months in charge at Old Trafford go so well that he himself ends up being the best choice.