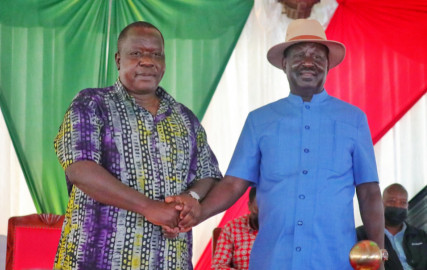 Speaking at a funds drive for Mwongori High School in Borabu constituency, Nyamira County on Friday, Odinga stated that at the time he had abandoned his ambition to pursue the country's top seat and instead wanted to endorse Matiang'i.

The former Prime Minister however revealed that CS Matiang’i, on his own volition, decided not to pursue State House job.

“We had discussions on which path to take and I was ready to support him but after re-evaluating the lay of the land we came to a mutual conclusion that I should enter the forest first,” Odinga explained.

Odinga however insisted that he is going to work closely with Matiang’i, whom he described as sharp and reliable; traits he says are the reasons behind President Uhuru Kenyatta trusts him.

The Interior boss, on his part, also vowed to support Odinga's stab at the presidency next year owing to his handshake with President Kenyatta.

“The bulk of Kenyans are where the President and Raila are and I also stand with all of them. Competitors will start hurling insults at me but this is where the government is. As the Kisii community we will never be caught loitering, I can’t lead the community to where there is no hope,” Matiang’i said.

Matiang’i reiterated that the Presiddent Kenyatta-Raila handshake in March 2018 had united the country despite criticism, hence it is clear that he is qualified enough to lead the country once Kenyatta exits.