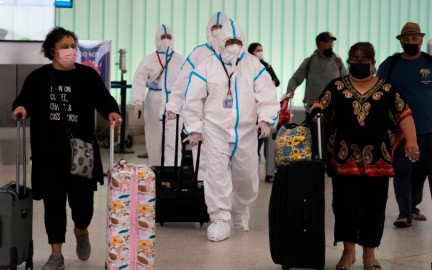 The Biden administration is reportedly preparing to impose stricter testing requirements for all international travelers entering the United States as part of an effort to curb the spread of the newly detected omicron variant of the coronavirus.

News outlets say the administration will also require everyone entering the U.S. to undergo a COVID-19 test a day before their departure, regardless of their vaccination status.

President Joe Biden is expected to unveil the administration’s new strategy in a speech Thursday.

The U.S. joins a growing list of nations that have imposed some form of travel restrictions or outright bans on foreign travelers since the omicron variant was first detected last week in southern Africa.

Japan said Wednesday that it will ask all international air carriers to suspend new reservations for all flights into the country until the end of December in response to the growing outbreak of the omicron variant. The move by the Ministry of Land, Infrastructure, Transport and Tourism comes as Tokyo confirmed its second case of the new variant.

Japan is also banning re-entry of all foreign nationals with Japanese residency if they are traveling from South Africa or nine other southern African nations beginning Thursday.

Saudi Arabia and Nigeria are the latest nations who are reporting their first cases of the new omicron variant since the first cases were revealed last week in southern Africa, bringing the total number of nations who have identified the new version to at least 22.State-run Saudi Press Agency reported Wednesday that a Saudi citizen tested positive after traveling from a country in north Africa, while Nigerian authorities say its first cases of omicron were detected in samples collected back in October from two travelers who had arrived from South Africa.

Meanwhile, the World Health Organization is recommending that people who are not fully vaccinated and at increasing risk of becoming severely ill or dying if they contract COVID-19 due to underlying conditions such as diabetes should postpone traveling to areas with high rates of community transmission. But the U.N. health agency has also declared that “blanket” travel bans imposed by countries will not prevent the global spread of the new variant, but will instead “place a heavy burden on lives and livelihoods”

WHO also says the travel bans can “adversely impact global health efforts during a pandemic by disincentivizing countries to report and share” vital data.