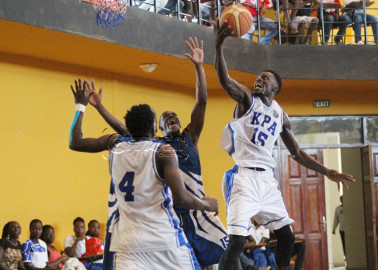 Kenya men's basketball team power forward Ariel “the doctor” Okall has rallied the government to upgrade sports infrastructure in a bid to elevate the level of the sport in the country.

Okall who was key to Morans’ trailblazing run to this year’s Afrobasket championships in Kigali Rwanda after a 29-year hiatus says the menace of inadequate basketball facilities has discouraged prospects from venturing full-throttle into basketball.

“The government needs to invest more in infrastructure development because that is the only way potential players can be encouraged to have an interest in the game.

“Also with good facilities, we can have a chance of staging international tournaments that can help both players and local coaches improve their game immeasurably.”

After guiding Nakuru-based The Swish, to finish in the top four of this year’s KBF Inter-County playoffs, Okall feels his colleagues and Kenya’s basketball greats should follow his cue in nurturing young talents to help the country in building a basketball powerhouse.

“The fact that I helped a girls team from the county grow gives me great satisfaction and I would like many of my colleagues who have excelled both locally and internationally to help in nurturing football talents because that is the only way we can grow the game,” he said.

Okall is also confident his team will match the demands of the new league following their promotion into the Kenya Basketball Federation (KBF) league.

“The biggest thing that we have learned as a team is that we need to play basic basketball and also protect our leads. These aspects are important because they are building blocks to a winning team.

“We will train hard and I’m sure we will do better when the league tips off.”

The Swish narrowly missed the finals after they lost to Butere 43-39 in the penultimate fixture of the 2021 KBF Inter-County playoffs held at the Uasin Gishu Primary and Moi University courts.