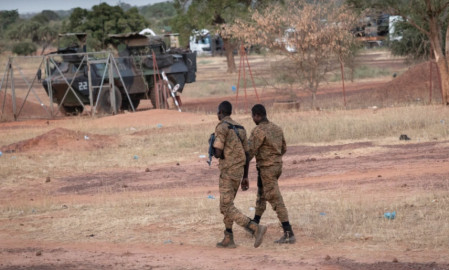 An internet and mobile phone disruption that began in Burkina Faso on Saturday continued into Monday, causing a widespread communication blackout, confusion and frustration.

People in the country report the 3G mobile network, which much of the West African country relies on, is not working. However, fixed line and wireless services, or WiFi, have not been disrupted, a diplomat based in the capital city Ouagadougou told VOA.

"Nothing has officially been communicated on the reason for cutting the 3G from what I have seen," said the diplomat, who wasn't authorized to speak to the media.

However, the shutdown began the same day a group of demonstrators blocked a French military convoy attempting to travel through the city of Kaya. The convoy of about 60 vehicles and 100 soldiers, headed from Ivory Coast to Niger and Mali, was forced to turn back to the capital of Ouagadougou due to the protest, according to official sources who spoke to VOA's Bambara Service.

In an attempt to disperse the crowd, Burkinabe security forces used tear gas and French troops fired warning shots into the air. Several protesters said they were injured during the event, although VOA cannot independently verify what caused the injuries.

NetBlocks, an organization tracking global connectivity, confirmed the continued internet outage Monday and said the type of disruption "cannot be worked around with the use of circumvention software or VPNs."

It added that the disruption stifles the flow of information and prevents news coverage of critical events in the country.

Access Now, another advocacy group, condemned the disruption, calling on authorities to restore internet connection. "While details are still emerging, one thing is certain: this is a blatant attack on human rights," the group tweeted Monday. "#InternetShutdowns are never acceptable."

Anger is growing in Burkina Faso over extremist violence that has killed thousands and displaced more than 1 million people, according to the United Nations.

Some of the protesters in Kaya are also angry at French military involvement in the conflict, due to accusations, advanced by misinformation online, that the French are arming the militant groups.