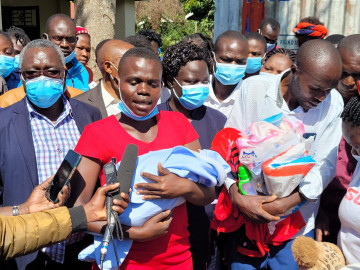 A family in Kamasielo village, Bungoma County is rejoicing after being reunited with their child who went missing two months ago at Kimilili Hospital.

The child went missing when his mother, Joyce Nakhumicha, was being operated on at the said hospital.

Nakumicha was ecstatic after being reconnected with her child after two long months of agony citing that she had even questioned God for blessing her with a child only to take the infant away from her.

On his part, the child’s father Joseph Sirengo, lauded the DNA process that played an integral part in confirming that the child, baby Hugo, was indeed their sire. He similarly wished his son all the best in life.

According to David Shivachi, the main doctor at Kimilili hospital, the infant was discovered by nurses at a local homestead during an immunization campaign in the area.

The person suspected of having kidnapped the infant has since been arrested and arraigned as investigations into the matter continue.