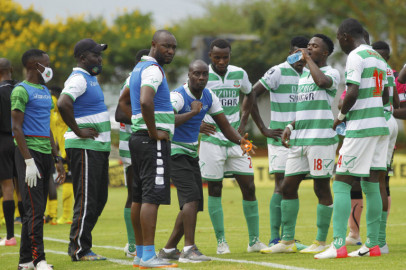 Nzoia were frustrated to a 0-1 defeat at their Sudi Backyard against Kakamega Homeboyz and Shikanda is bullish that his boys can fire on all cylinders in their Wednesday.

Nzoia Sugar FC tactician Ibrahim Shikanda is confident his side will bag maximum points when they take on Nairobi City Stars in their next Football Kenya Federation Premier League (FKF) fixture tomorrow (Wednesday).

Nzoia were frustrated to a 0-1 defeat at their Sudi Backyard against Kakamega Homeboyz and Shikanda is bullish that his boys can fire on all cylinders in their Wednesday.

“We really need to score goals, we need to push hard in our Wednesday assignment against City Stars, we have to pocket the three points at any cost, my boys are in high spirits, we’ve been unlucky, we play well but end up getting different results,” he said.

Nzoia has been on a torrid downward spiral as they have recorded five consecutive defeats under the watch of seasoned tactician Ibrahim Shikanda.

The poor form notwithstanding, Shikanda has revealed that the team will find its footing and get back to winning ways in Wednesday's assignment.

The coach stated that the team has just been unlucky in the past but are working to correct that worrying form.

Currently, the team sits second from bottom on the log on two points after seven matches played so far.

Meanwhile, City Stars sit fifth on the log with 13 points just three points shy off League leaders Kariobangi Sharks and will be looking to redeem themselves after their frustrating 1-2 loss against to Sharks over the weekend.