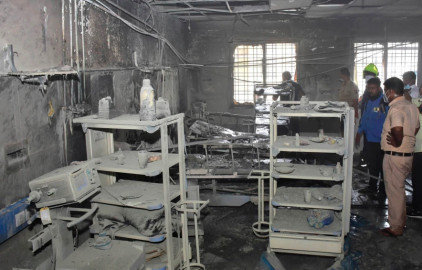 People inspect a hospital's COVID-19 ward that caught fire, in Ahmednagar, in the western Indian state of Maharashtra, Nov. 6, 2021.

Ten patients died Saturday after a fire broke out in a hospital's COVID-19 ward in the western Indian state of Maharashtra, officials said.

An official told New Delhi Television that around 17 patients were in the ward in the city of Ahmednagar when the fire broke out. The remaining patients have been moved to a COVID-19 ward in another hospital, district collector Rajendra Bhosle said.

While the fire has since been brought under control, the cause was not immediately clear, he added, saying officials will carry out an investigation.

The former chief minister of the state, Devendra Fadnavis, took to Twitter to express his condolences and called for “strict action” against those responsible.

Such incidents are not uncommon in India. In May, when the country was battling a devastating surge in coronavirus cases, a fire in a COVID-19 ward in western India killed at least 18 patients.

Poor maintenance and lack of proper firefighting equipment often cause deaths in India.