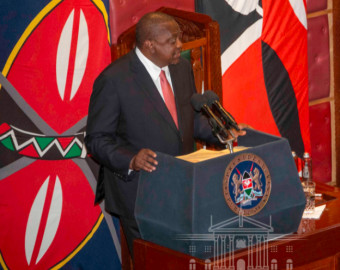 President Uhuru Kenyatta has revived the contentious debate on the Building Bridges Initiative (BBI), criticizing the Judiciary for nullifying the process which sought to introduce several amendments to the 2010 Constitution.

Delivering his eighth State of the Nation Address in Parliament on Tuesday, President Kenyatta said the courts went against the will of the people consequently denying the country an opportunity to realise much-needed political stability.

The Head of State insisted that due process was followed to ensure that the BBI process was a popular initiative, “but a few individuals sat back in the back room and decided otherwise.”

“And as I have said before, our country has been in a constitutional moment since the 2017 election…. My Administration attempted to resolve the constitutional dilemma facing our country. We went to the people and 5 Million Kenyans agreed to initiate the process of putting to the vote the First Amendment to the 2010 constitution,” said Kenyatta.

“The First Amendment was, thereafter taken to the County Assemblies, where it received nearly unanimous endorsement. In Parliament, the People’s Elected Representatives gave the First Amendment a clear nod of approval by a margin in excess of two-thirds.”

He added: “If Article 1 of the 2010 constitution states that all sovereign power rests in the people of Kenya; and can be exercised either directly or through their representatives, the people spoke regarding the First Amendment. They exercised this power directly through the IEBC petition for constitutional change, and indirectly through County Assemblies and Parliament."

"The Record of Parliament attests to the fact that the people wanted constitutional change... but a few individuals sat back in the back room and decided otherwise,” said Kenyatta.

According to President Kenyatta, owing to the nullification of the BBI process Kenyans suffered three major losses:

The first loss, Kenyatta said was equity in resource allocation. He said the First Amendment to the 2010 Constitution would have seen an increase to the minimum county allocations from the current 15 percent to 35 percent.

“Had this amendment been adopted, counties would have received Ksh.562 billion instead of the Ksh.316.5 billion allocated to them in the 2020/21 Budget; an increase of over 75 percent of their current allocation,” said Kenyatta.

The Head of State noted that the second loss from the First Amendment was proportional representation. He said the BBI would have ensured that 50% of all Senators are women.

“…And the logic here was to ensure that if we percolate the proposed 35% of our national revenue to counties, women should be at the centre of decision-making on how this revenue is utilized. But this did not happen,” he stated.

The third loss, Kenyatta said was about expanding the National Executive to accommodate a broader face of Kenya and expand representation. This he said would have constitutionalized the end of the winner-takes-all outcome of elections that creates "so much toxicity and tension."

“We cannot behave like the proverbial ostrich and bury our heads in the sand. A constitutional moment does not resolve itself, simply by being, ignored. The need for political stabilisation is the most urgent task facing Kenya today, and it is the foundation upon, which our greater justice, fairness, health, wealth, and security will be built on. For that reason, it shall happen,” said Kenyatta.

The president reiterated that political stabilisation is paramount for the country to secure its growth and development.

He said it would be of no importance to make investments if after every five years toxic political climate and election-time tensions would reverse the gains painfully secured.

Kenyatta cited all previous elections saying it is only in 2002 when the country was not left bleeding economically due to volatile elections.

He said in 1992, the election cost the country Ksh.248 billion in lost economic growth, lives were lost and populations displaced.

“And during this election, Kenya’s Foreign Direct Investments fell by two-thirds, from Ksh.1.8 Billion to Ksh.600 Million,” said Kenyatta.

He added that in 2007, the election eroded an equivalent of Ksh.250 billion in lost economic growth in a matter of days with the economy losing close to Ksh.1 trillion in 2017.

“And in 2017, we lost close to Ksh.1 Billion every working hour for the 123 days we held the election. In fact, in the 2017 election the economy lost close to Ksh.1 Trillion in response to the nullification of the presidential election,” said Kenyatta.

He concluded: “The need for political stabilisation is the most urgent task facing Kenya today, and it is the foundation upon, which our greater justice, fairness, health, wealth, and security will be built on. For that reason, it shall happen.”

In nullifying the BBI, the court ruled that President Uhuru Kenyatta had no legal authority to introduce a popular initiative to amend the Constitution.

The government and the proponents of BBI lost in their attempt to appeal the ruling in the Court of Appeal.

The Attorney-General has since moved to the Supreme Court to challenge eight findings of the Appellate Court that overturned President Uhuru Kenyatta's bid to amend the constitution through the BBI process.

The hearing of the BBI appeal case at Supreme Court is set to begin in January 2022.