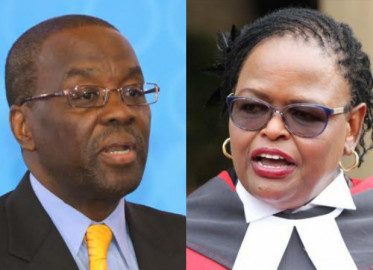 Chief Justice Martha Koome has criticised a call by former Chief Justice Willy Mutunga to have judges go on strike in solidarity with their 6 colleagues whose appointment was declined by President Uhuru Kenyatta.

According to Lady Justice Koome, what Mutunga is calling for amounts to incitement and goes against everything the Judiciary stands for.

“Notwithstanding the reasons for which that call was made, it is imperative that we all examine the implications of that regrettable incitement meant to disrupt access to justice for Kenyans,” Koome said in a statement.

Despite Mutunga having retired as Chief Justice, Koome argues that the former CJ took an oath to uphold the constitutional mandate of the judiciary, a vow that he should adhere to even in retirement.

“While assuming the position of 13th Chief Justice of the Republic of Kenya, Dr. Willy Mutunga took oath of office to diligently serve the people and the Republic of Kenya and to impartially do Justice in accordance with the Constitution, and the laws and customs of the Republic, without any fear, favour, bias, affection, ill-will, prejudice or any political, religious, or other influence,” Koome said.

“Though since retired, this solemn affirmation normatively transcends the life of every retired Chief Justice to secure, guide and protect the right of every Kenyan to access justice and indeed the substratum of the Constitution.”

According to Koome, the call to have one of the arms of the government to down its tools is far reaching and inappropriate.

“While it is appreciated that every person is entitled to intellectual or opinionative expression, it must be remembered that where such expressions threaten the lives and livelihoods of millions of Kenyans, we must all stand together to find lesser damaging alternatives which are not at variance with our collective obligations as a people to defend the Constitution,” she said.

Koome similarly reiterated that during Mutunga’s reign, the former Chief Justice favoured a more diplomatic approach when addressing issues in the judiciary instead of pushing for go slows.

Koome consequently called on all judges to disregard the call by Mutunga and carry out their mandate as stipulated by the constitution.

“I urge Judges to disregard this pernicious call and focus on the progressive reforms that we have committed to pursue, central to which is finding mechanisms to reduce case backlog. We cannot afford to abandon our judicial mandate owing to a matter that is pending before the Court of Appeal and which will be accorded the centrality that it deserves,” Koome concluded.

The statement by Koome follows Mutunga’s Thursday declaration calling on judges to down their tools in protest of the Executive’s continued trend of ignoring court orders. According to Mutunga, the Executive will only take the judiciary seriously if they act immediately.