Dormitory housing 280 students burns down at school in Migori 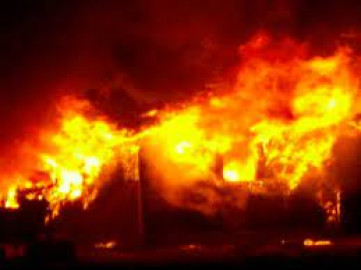 Properties of unknown value have been reduced to ashes following a fire incident which gutted down a dormitory housing 280 students at St. Peter Abwao Secondary School in Suna West, Migori County.

The school principal Mr. Jecktone Ogolla said the inferno which began at around 8pm consumed the building and the students’ personal property.

Mr.Ogolla said efforts to put out the fire were futile and they were not able to salvage any property that was inside the dormitory.

No one was injured as the students were in the classroom for evening preps.

Meanwhile Mr.Ogolla has appealed to the government, elected leaders and even the well-wishers to come on board to build another dormitory and also buy the learners personal effects like mattresses and blankets that were destroyed.