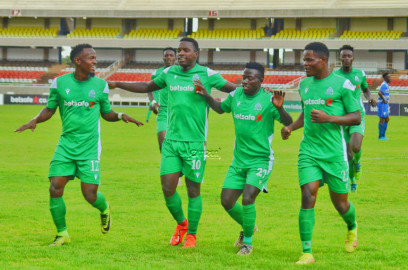 Gor reached the playoff round after defeating Al Ahly Merowe 3-1 in the opening leg played in Suez, Egypt with the Sudanese side failing to show up for the second leg in Nairobi

Gor Mahia FC assistant coach Sammy ‘Pamzo’ Omollo says getting drawn against AS Otoho d'Oyo in the CAF Confederation Cup was ‘fair’, adding they will fancy their chances against the Congolese side.

Omollo is confident his charges will get into the group stages, who have a poor pedigree on the continental stage.

“For me I think it's a fair draw since our opponents have not been performing well when it comes to international games of late, and have little experience on this stage,” Omolo said.

Gor reached the playoff round after defeating Al Ahly Merowe 3-1 in the opening leg played in Suez, Egypt with the Sudanese side failing to show up for the second leg in Nairobi.

The draw conducted on Tuesday pitted Kenya’s other continental representatives Tusker FC, who dropped from the CAF Champions League after a 5-0 aggregate loss to Zamalek, with CS Sfaxien of Tunisia.

Tusker coach Robert Matano has admitted the Tunisians will pose a tough opposition to their qualification hopes but remained optimistic.

“It’s a tough draw but we will definitely give our all to get good results. We have learnt a lot from both matches against Zamalek and we have seen what we need to do and improve on,” Matano said.

The former Tusker Captain James Situma believes the Kenyan champions have all it takes to progress.

“This is like a second chance for them to redeem themselves and maybe make a mark because it has something to play for. And with the arrival of experienced players it means more competition in the team and thus whoever is picked ahead of the other should be able to bring results.

"It was a false start for Tusker at home (against Zamalek). They would have gone for a win here then forced a draw in Egypt, but that did not happen so they need to do this when they meet Sfaxien here,” Situma said.

The 16 winners on aggregate will progress to the group stage.