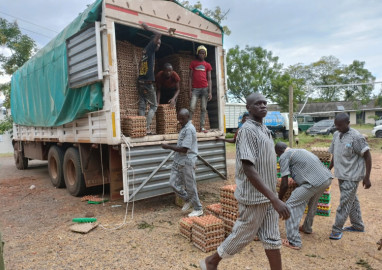 Police in Homa Bay County have impounded a lorry that was used to illegally transport 7,800 crates of eggs worth Ksh.2.7 million into the country from Uganda.

The lorry was impounded by detectives on the Mbita-Homa Bay road when its driver tried to evade customs and immigration officers from inspecting it.

Kavoo said the driver attempted to evade a police road roadblock at Mbita by speeding off towards Homa Bay town, but the officers engaged in pursuit for more than 50 kilometers.

The officers reportedly drove past the lorry and lay another road block at Rodi Kopany, but when the driver tried to evade that one as well, they fired two shots and deflated its tires.

The driver and another person who was on board then abandoned the lorry and disappeared into the darkness.

The lorry was towed to the Homa Bay Police Station where it was established that it was ferrying eggs without valid documents.

Kavoo further stated that they have since launched investigations into the matter to ensure that the driver is arrested and charged in court.