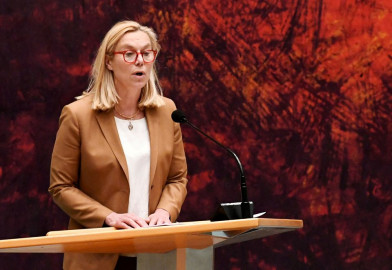 The Netherlands’ new finance minister Sigrid Kaag will miss the ceremonial inauguration of the new Dutch government on Monday as she has tested positive for the coronavirus.

“I have tested positive for corona. It will be a slightly different start then I had hoped for”, Kaag tweeted on Sunday.

“My installation will take place digitally. Luckily I feel fine.”

Prime Minister Mark Rutte’s fourth consecutive government is set to be installed by Dutch King Willem-Alexander on Monday, almost 10 months after the last election and a year since his previous administration stepped down.

Although the government coalition consists of the same four parties that have been in charge since 2017, it took a record of almost 300 days to bring them back together after the inconclusive March 17 elections made parties more reluctant than ever to compromise.

Their installation comes amid a sharp rise in coronavirus infections due to the Omicron variant, despite a broad lockdown that has kept most public places closed since mid-December.

Former United Nations diplomat Kaag served as foreign minister in the previous government and is the leader of the second-largest party in the coalition, pro-EU D66.

Besides missing the meeting with the king, she will also be absent from the traditional photograph of the new cabinet taken on the steps of the royal palace.