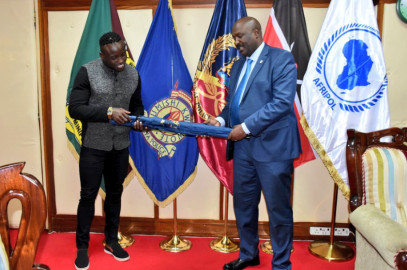 Sprinting sensation Ferdinand Omanyala was on Friday inducted into the National Police Service (NPS) for a new role that will see him represent the force in future track events.

The 25-year-old burst on to the scene after a series of remarkable results at the 2021 Tokyo Olympics saw him finish fourth in the 100 metres final.

In September, Omanyala, a second-year Bachelor of Science student at the University of Nairobi, would etch himself in history by breaking Africa’s 100 metres record at the Kip Keino Classics held at the Moi International Sports Centre.

Omanyala was inducted into the police force by Inspector General Hilary Mutyambai at his Jogoo House office.

The IG advised him to maintain his ethical approach to the sport, in his new role, in order to realize his full potential.

"I wish you well in the service of your country," Mutyambai said.

The induction ceremony was attended by the Dean of Students University of Nairobi Johnson Kinyua and the Student Union (UNSA) Head of Communication, Joshua Sirma.

On his part, Omanyala thanked the government and the police service for considering him for the role citing that he will repay their faith in him on the track.

“It is an honour to serve the National Police Service and I promise to give my best as an athlete," he said.