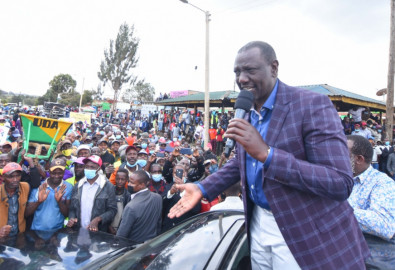 Deputy President William Ruto has assured political aspirants that the United Democratic Alliance (UDA) party will hold a free and fair nomination exercise ahead of the 2022 polls.

Ruto spoke while addressing aspirants from Narok and Nakuru counties at his Karen residence on Monday.

The DP said a free and fair nomination exercise was the party’s irreducible minimum and no one has an upper hand in it.

He said the party does not have favourites who are walking around with nomination certificates.

“The matter of free and fair nominations is not a favour from the party, it is a right to every member of this party. It is the irreducible minimum that any member can ask of this party…” said the DP.

The party’s Secretary General Veronica Maina also gave the same assurance, telling the aspirants to be confident that the party will strive to conduct the most transparent nomination exercise.

“We know the history has not been very good for the political parties, but UDA will turn the page,” said Ms. Maina.

“The way UDA has grown by the grace of God, we will make sure everybody belongs. Nobody will be more important than the other, we will have something called a level playing field.”