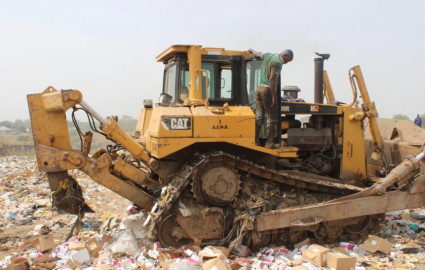 Nigeria destroyed more than 1 million doses of AstraZeneca's COVID-19 vaccine on Wednesday after authorities said they could not be used before their expiration date.

"We had developed countries that procured these vaccines and hoarded them," he said. "At the point they were about to expire, they offered them for donation."

Last week Shuaib had announced that Nigeria would no longer accept such donations, though he did not specify publicly what officials considered too short a shelf life.

Only 2% of Nigeria's 206 million people are fully vaccinated, and health officials have set an ambitious goal of vaccinating more than a quarter of the population by February. While hesitancy has been high, the country's vaccination rate has nearly doubled in the past week.

Nigeria has been seeing a spike in confirmed infections since it detected the highly infectious omicron variant in late November, recording a 500% increase in cases over the past two weeks, according to the Nigeria Center for Disease Control.

The 2,123 new COVID-19 infections it confirmed on Tuesday was the highest daily tally since last January and the second highest since the pandemic began.