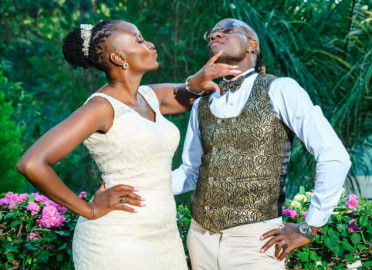 Gospel artiste Guardian Angel’s wife Esther Musila has responded to social media critics who have been questioning the possibility of the couple having children following their recent wedding.

Taking to Instagram on Monday, Musila shared a photo of herself and her husband Guardian showing their wedding bands.

Musila captioned the photo; “I’m so ready for our future”, to which an Instagram user posed, “How now without a children’s?” (sic)

Musila was however not shy of responding to the critic, taking them head-on with a sarcastic response; “who are/what are children’s?”

Musila, having not answered the question from the first Instagram user, prompted a second reaction from yet another user who said, “Congratulations, tunangoja mtoto sasa.”

A seemingly irate Musila went ahead to question the fan; “Wako? Tunakuzalia ama?”

This is not the first time the couple has received criticism over their union, however, they have remained adamant with their love story.

When reports emerged that the mother of three and the gospel artiste were dating, they were met with critics who could not get over their twenty-year age difference.

However, during the wedding that took place on January 4, Guardian Angel seemed to address critics through a performance of the heavily popular song ‘Sweetie Sweetie’ by Zabron Singers.