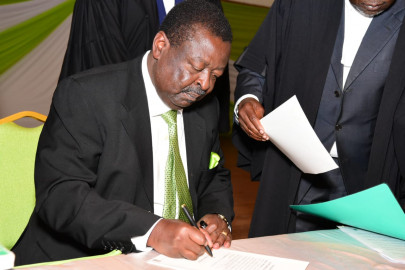 Amani National Congress (ANC) leader Musalia Mudavadi has been unveiled as the party’s flag-bearer, with the mandate to now enter or negotiate pre or post-election pacts with other parties.

ANC Secretary General Simon Kamau announced that the NDC had resolved and confirmed Mudavadi as its presidential candidate in accordance with the party’s law.

The ANC leader was unveiled during a much-hyped National Delegates Convention at the Bomas of Kenya on Sunday.

The NDC, hyped by Mr Mudavadi’s supporters as an ‘earthquake’ of far reaching political proportions saw the surprise attendance of Kenya’s second in command, Deputy President William Ruto who has in the recent past been urging the OKA principal to work with him.

Missing in action however is ‘Azimio La Umoja’s  Raila Odinga who is on a tour of Nakuru County.

Earlier, leader allied to the former Prime Minister, among them Kalonzo Musyoka, Gideon Moi and Jimi Wanjigi are said to have walked out shortly after making their way to the Bomas of Kenya.

The attendance of the MPs in a function to endorse Musalia to vie for Presidency was seen as an indication that Mudavadi could be teaming up with Ruto for August 9 General Election.

All indications have been that Musalia would be willing to work with Ruto, with his ally and Kakamega Senator Cleophas Malala leading the charm.

"We in the ANC party have been categorical that you won't choose friends for us, your enemies must not necessarily be our enemies," Malala has been previously quoted as saying.