No cash was stolen from Kisumu branch, all staff are safe - Equity Bank says 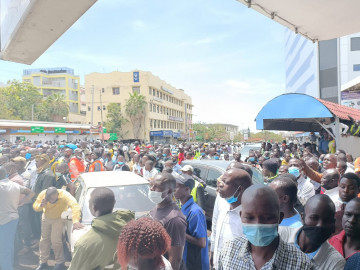 A crowd mills outside the Equity Bank Angawa Branch on Tuesday afternoon following a botched robbery at the bank .

Equity Bank has confirmed that no staff was injured or cash stolen during a botched robbery at its Angawa Avenue branch in Kisumu on Tuesday, November 23.

“We had an incident where armed robbers gained access into the banking hall of our Kisumu Angawa Branch. Security agents led by local authorities are currently on the scene. All staff are safe and no cash was lost,” the lender said in a tweet.

According to multiple eyewitness reports, several armed men stormed the bank at approximately 11am before discharging a tear gas canister which forced some clients and staff members to flee for their lives.

The successful escapees soon after raised the alarm and first law enforcement responders arrived at the bank at approximately 11:20 am securing and isolating the crime scene as they waited for backup.

Soon after, Nyanza Regional Police Commander Karanja Muiruri arrived at the bank in the company of more police officers. A fire truck also arrived on the scene to counter the effects of the teargas being hurled by the robbers who were, at this point, already surrounded.

According to multiple reports, over 30 police officers responded to the robbery with several being seen on video scaling the first-floor building that houses the bank as the operation progressed. Gunshots could also be heard inside the banking hall an hour after the incident was first reported.

At around 12:30 pm, the police labelled the siege as highly risky since they could not exactly determine the number of hostages the robbers had taken. Police said using force would put the lives of the captives in jeopardy.

At 12:50 pm, police announced that they were waiting for the bank’s architectural schematics before they could successfully storm the building. At the time, police believed that the robbers were seeking refuge in the bank’s lavatories.

At 1 pm, law enforcement agents were able to breach the bank by gaining access to the institution’s ground and first floors.

The siege lasted for four and a half hours but police were unable to nab the culprits who they suspect disguised themselves as clients during evacuation efforts.

Police are optimistic that CCTV surveillance and eyewitness reports will help them identify the suspects as investigations into the matter continue. Most of the clients who were evacuated are also currently being questioned by police.