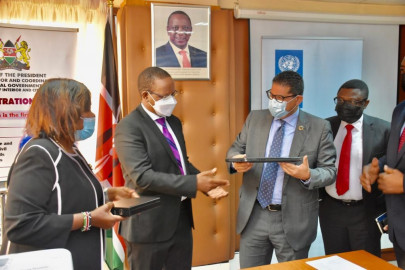 Kenya has received equipment worth Ksh.50.8 million from Japan which will be used to augment the country’s digitized and secure identity management systems.

According to Interior PS Karanja Kibicho, the equipment, which includes computers, servers and other ICT material, will be distributed across different Civil Registration Service departments to boost digital birth registrations, which will guide future national government planning.

“We are grateful to UNDP and the government of Japan for the kind donation. The equipment will go to deserving field registries across the country so that we can push registration of births from 82.9 per cent to the 100 per cent global target.”

The PS noted that the donation demonstrates the confidence the UN has in the investment that Kenya has been making towards the integration and automation of civil registration services and formulation of the NIIMS/Huduma Namba legal framework.

The government, Kibicho stated, is also eyeing to drive death registrations to 85 per cent from the current 62 percent.

“We have discussed the importance of data integration and the circumstances surrounding the project. We hope to proceed to Phase II of mass registration once we get over the current hurdles in the form of court cases so that we can register the 12 million Kenyans who were not captured during the first phase,” the PS said.

On his part, UNDP’s Resident Representative Walid Badawi, said Kenya has been chosen to pilot the United Nations’ One Legal Identity Agenda that aims to eliminate global statelessness. The program is founded on SDG 16 that seeks to provide legal identity for all, including birth registration, by 2030 to ensure inclusive development.

“Such equipment will go a long way to achieving the global averages. We applaud the tremendous success Kenya has demonstrated on the continent and the world, but it will only work if the government continues taking the lead,” Badawi said.