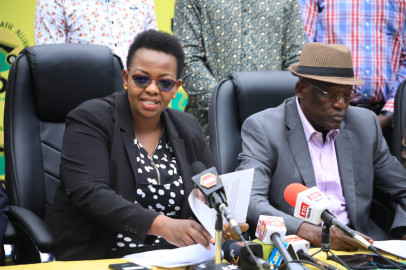 “​​We write to express our profound concern about recent deeply worrying security incidents, sustained by official inaction and condonement by the State, and their implications in the light of the impending General election, and national stability in general,” stated UDA.

In the letter to the Head of State, UDA claims that Raila’s team appears to get away with the alleged violence and incitement for being a party in the 2018 ‘Handshake’ between Odinga and the President himself.

“In the Handshake era, ODM’s Bedroom Policy and the use of violence to advance political strategies appear to receive tacit official support to the extent that all incidents of threatened and actual violent disruption of our political events, as well as attacks on our members, are invariably treated with a contemptuous absence of seriousness,” reads the letter.

The party cites six of the ten rallies they say the violence happened, claiming Inspector General of Police Hillary Mutyambai’s office has turned a blind eye to the incidents.

“This negligence on their part is not only dismaying to all law-abiding Kenyans and disappointing to the UDA fraternity... It also explicitly signals the State’s approval or support for the criminal acts of ethnic and political violence conducted in furtherance of a divisive agenda obviously focused on the 2022 General Election,” UDA tells the President.

The statement adds: “​​Without your impartial and proactive enforcement of the legal framework to uphold Constitutional freedoms, human rights, democratic participation and national cohesion, your government will in effect be enabling the ODM and Azimio to set the stage for an extremely troubled General Election season in 2022.”

The party now wants assurance of safety from the Head of State and a guarantee that the government will be impartial during the electioneering period.

“We, therefore, demand an assurance from Your Excellency, as the chairman of the National Security Council, that Kenyan lives and property remain protected under the law.

“That the instruments of State and security apparatus will not be deployed in a partisan manner, or to cause mayhem and deaths to propel a preferred candidate to victory, hence compromising the constitutional right of 50 million Kenyans to have a say in a free fair, transparent and peaceful election guaranteed by the Constitution,” stated UDA.

ODM has since distanced itself from the mayhem, terming UDA's accusations as a desperate attempt to distract the public from the incitement allegations the camp is facing.

“ODM declines the invitation to be blamed for seeds of discord sown by the corruption lords who have panicked at the prospect of a Raila Presidency,” ODM Secretary-General Edwin Sifuna said in a statement on Monday.