Governor Waiguru: Ngirici left UDA because she was scared of competition 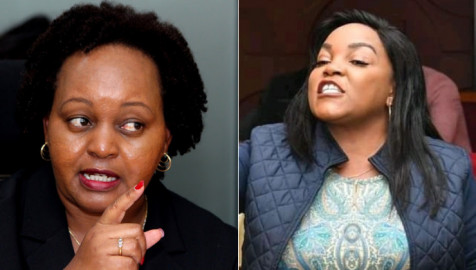 A side by side photo of Kirinyaga Governor Anne Waiguru and Woman Representative Wangui Ngirici.

According to Waiguru, Ngirici allegedly cut ties with UDA out of fear after realizing that she stood no realistic chance of beating her in the party’s nominations ahead of the August polls and not because she was forcefully evicted; as such her recent verbal attacks on the DP’s outfit are baseless and unfounded.

She was speaking in Kirinyaga’s Gichugu constituency on Friday when she oversaw the official commissioning of Kimwana dispensary.

While drumming up support for DP Ruto, Waiguru reiterated that all politicians are legally entitled to campaign in any part of the country without any hindrance from rivals, as such Ngirici should stop alleging that the Governor is actively attempting to shut her out of Kirinyaga politics.

She similarly urged area residents to look at the development agenda of persons interested in elected positions and not the party to which they are affiliated.

While announcing that she would contest for Kirinyaga’s gubernatorial position on an independent position a few weeks ago, Ngirici, who defected from UDA in December 2021, claimed that UDA was coercing her to drop her gubernatorial aspirations and instead go for the Mwea parliamentary seat

She also purported that Waiguru, who she claims already secured the party’s nominations using unscrupulous means, had brought no meaningful development to the people of Kirinyaga during her first term in office as such she couldn’t be  entrusted to change the county’s fortunes should she be elected into office again.