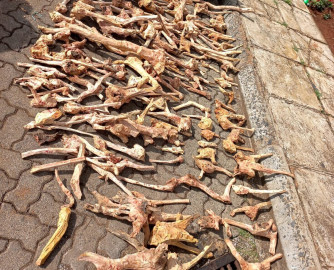 Police in Athi River, Machakos County have nabbed a woman carrying 250 kilograms of Sandalwood, estimated at around Ksh750,000.

Beth Wambui, 42, was arrested at Athi River driving towards Mombasa, with the pieces of the precious wood packed in sacks at the boot of her station wagon, according to a Thursday report by the Directorate of Criminal Investigations (DCI).

“The aromatic tree is harvested illegally after the government outlawed its harvesting in 2007. However, unscrupulous traders continue to uproot the tree predominantly found in Baringo and Samburu counties,” DCI stated.

Sandalwood tree is harvested for its essential oil, which is extracted for use in the medicine and cosmetic industries.

It is cited as one of the world’s most expensive trees and is listed in the International Union for Conservation of Nature’s Red list of Threatened Species.