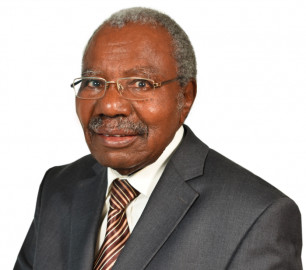 Family and friends of the late Joseph Gilbert Kibe, widely known as Joe Kibe, on Wednesday converged at the Consolata Shrines in Westlands, Nairobi for a memorial service in his honour.

Kibe, a prominent businessman and former civil servant who passed away on December 1, 2021, was eulogised as a man of order who was a peacemaker and mentor to many.

He underwent his education at Mathari Catholic Mission Intermediate School in Nyeri and Nyeri High School before joining Makerere University College in Kampala Uganda where he graduated with a BA degree in History, English and Political Science in 1962. He followed this up with many short courses both locally and abroad when he joined the Civil Service.

Being one of the few university graduates at the time, Kibe was immediately employed as a District Officer/Second Class Magistrate and posted to Kilome Division of Machakos District at the young age of 27 in April 1962.

He was later transferred to Voi in the same capacity before he was moved to the Treasury in December 1963 and quickly rose through the ranks to become Permanent Secretary in the Ministry of Commerce & Industry at the age of 33.

During Mzee Jomo Kenyatta's administration, Joe Kibe served as Permanent Secretary in six ministries; the Ministry of Commerce & Industry, Economic Planning, Agriculture & Animal Husbandry, Water Development, Lands & Settlement and Tourism & Wildlife. He was a Permanent Secretary for 11 years until 1979 when he left the position under Moi's regime.

After his abrupt exit from the Civil Service, Joe Kibe did not seek employment again but he continued to serve the country as Board Chair of three government parastatals: Agricultural Finance Corporation (AFC), Horticultural Crops Development Authority (HCDA) and Egerton College.

"Fortunately, he was also a good investor right from the beginning and had quietly accumulated a number of prime assets that at the time, included the then 360 acres coffee farm call Hardy Estate (currently Bahati Estate) located off Gatanga Road," reads his eulogy.

Joe Kibe was married to Monica Gathoni Mbugua with whom they met while they were students in neighbouring schools at Mathari and tied the knot in 1962.

The couple was blessed with three children; Capt. Gilbert Macharia Kibe, who is married to Josephine Njeri Macharia, is a senior pilot who currently is the Director General of the Kenya Civil Aviation Authority (KCAA), Margaret Wanjiku Kibe, an accountant and film producer who is the Managing Director of Bahati Ridge and Victor Mbugua Kibe, who is married to Grace Waithera Mbugua.

Joe Kibe's wife eulogised him as a visionary who was well organized and planned his life activities well.

"There is much to say about Joe, but I will not say more. I thank God for giving me Joe for the 59 years we have been together. Rest well Joe, my husband and my friend, until we meet again," she said.

At the memorial service, Julius Gilbert Kimari, a brother to the deceased, eulogised the late Kibe as "a peacemaker, a man of order, discipline and a stickler to time, rules and procedure of doing things."

"He has encouraged reconciliation among our clan members – encouraging us to always seek to solve our difference amicably. He believed that if people engaged themselves to solve problems at the onset, peaceful settlement is more likely to be realized than ignoring them," said Mr. kimari.

"The greatest lesson I learned from him is to be God-fearing and practice the 3 tenets of honesty, integrity and trust. My Dad was the greatest father one could ever have, and I thank God for him," said Gilbert Macharia Kibe.

Victor Mbugua said his father Joe Kibe was a great man, adding that "I cannot adequately describe here in these few paragraphs, for his memorial service."

"He was first, a loving and trusting Father, a true friend, a knowledgeable, clever and bright Man, a governance expert, in both the public and private sector, a businessman, a farmer, a writer, a patriot, a golfer, and a mentor, to me, and too many. A true son of Kenya," said Victor.

Royal Media Services Chairman Dr. S.K Macharia who read The Council's tribute said: "In The Council of Eminent Persons of Murang’a, the Late Mr. Kibe will be remembered for his great love for Murang’a County and indeed the Republic of Kenya.”

"His commitment to the economic and social development of Murang’a County in particular and the Country in general is evidenced by his great contributions both financial and in kind which Joe made to The Council in furtherance of its mandate and objectives and also towards national agenda," said Dr. Macharia.

At the memorial service, Monica Kibe said her late husband had declared that upon his demise he be buried within 3 days at their home in Kigoro.

It was also Kibe's wish that only his immediate family attend the funeral after which the family would decide when and how to do the memorial service.

"Today is the day of his memorial service and we are very grateful for you all coming to share with us memories of Joe," said Monica Kibe.

Joe Kibe passed away on December 1, 2021 at the Aga Khan Hospital where he was undergoing treatment for heart-related conditions.