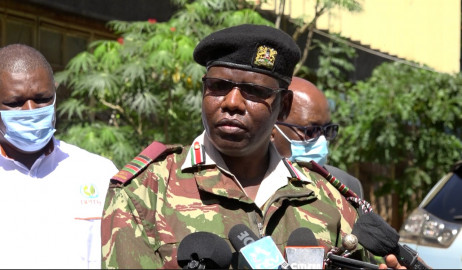 The impact of the persistent drought in northeastern Kenya continues to bite people, their livelihoods and wildlife in Marsabit following the failure of the short and long rainy seasons last year.

Marsabit County residents have appealed for emergency intervention to stave off possible starvation as drought and famine ravage the region.

The national government, county government and aid organisations are stepping in to address the dire situation but areas of Maikona, Hurri Hills and Ileret in North Horr Constituency are the worst hit with livestock deaths hitting hundreds daily.

At Burarati, Duba Kanchoro, a local resident said he has lost more than 20 cows in the last five months, nearly depleting his source of livelihood. Pastoralism is the main source of income for the majority of the people in northeastern Kenya.

“Our animals are our way of life and source of livelihood. We have lost so many animals to the drought and it is threatening our survival,” Duba said.

Households have had to adopt frequent and severe coping mechanisms to cope with short tem food consumption gaps at the family level, according to the latest Marsabit County Drought Early Warning Bulletin for December 2021.

The report, published by the National Drought Management Authority (NDMA) revealed that households consume up to four times less their normal water consumption, making do with 5 liters per day compared to the normal 15-20 liters of water per person per day.

“Each family gets 40 litres for five days to cater for the whole family,” Ms Chula Hacho said.

The water is being provided by aid groups through water trucking.

On January 13th, the national government in partnership with the Kenya Wildlife Service, National Environment Management Authority and World Wide Fund for Nature-Kenya launched emergency drought response in which they provided over 180,000 litres of drinking water, foodstuffs worth Ksh500,000 and 2,000 bales of hay for livestock.

A committee chaired by North Horr Deputy County Commissioner Sylvester Mwangulu channeled all the donated foodstuffs to Galas, the worst-hit area in the region. Galas, commonly referred to by the locals as Gas, is home to 5,517 people and 860 households, according to the 2019 Kenya Population and Housing Census.

“This donation will sustain households for about three days. In Galas centre, we have 420 households and 300 are in need of food aid. By tomorrow, the livestock will have consumed all the hay provided. We are still in need of more assistance,” said Galas chief, Mata Sora.

Galas, the chief said, has not rained for seven months and it had received scanty rainfall prior.

“We started losing our livestock about three months ago. Camels are dying. Goats and sheep have been dying. If it doesn’t rain in the next two or three months, we may lose everything,” Chief Mata said.

The December 2021 NDMA’s Early Warning Bulletin revealed that livestock deaths due to drought, especially amongst camel calves, were recorded across the county with livestock morbidity cases also on the rise in all the species.

“Our camels have not reproduced since December 2020. This year we have not had new calves. They don’t reproduce during drought,” added the local chief.

Speaking at the launch of the Emergency Drought Response for Climate Change Adaptation and Resilience, WWF-Kenya’s Head of Conservation, Jackson Kiplagat, said that the intervention will be key in preserving human lives as well as wildlife in the Marsabit ecosystem.

“Many northern Kenya counties have potential to provide home for biodiversity and that is why it is important that we step in,” said Kiplagat.

Already hundreds of wild animals have been reported dead due to the famine. Marsabit County hosts five wildlife conservancies covering 1.4 million hectares, according to a report by the Kenya Wildlife Conservancies Association. The community conservancies include Songa, Jaldesa, Melako and Shurr. Some of the wildlife found in Marsabit includes the Grevy Zebra, elephants, reticulated giraffes, buffalos, hyenas and ostriches.

Meanwhile, over 13,000 students in more than 60 schools in Marsabit and Samburu counties are struggling to stay in school because of the drought. Approximately 2,000 learners have reportedly dropped out of school due to the prolonged drought and biting famine in the two counties.

Some of the learners have left with their families in search of pasture and food to the neighboring counties while others were sent by their parents to fish along the Loiyangalani Lakeshore to make money for food, he explained.

The situation has worsened since the national government’s relief food distribution to schools in the region ceased in July 2021.