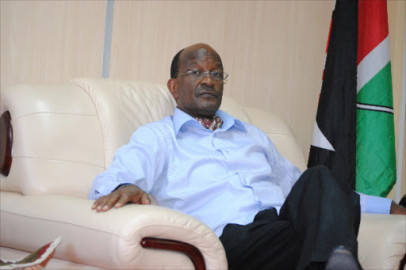 Former Kamukunji Member of Parliament Norman Nyagah has declared his bid to vie for the Embu Senatorial seat in the forthcoming general elections.

After being absent from active politics for about 15 years, Nyagah seeks a stab at the legislative seat saying that he is heeding calls from his people to serve them.

“I have been put under tremendous pressure by the people of Embu County. I have been in the last year seen a lot of people coming to see me; many delegates coming here from four sub-counties and I have been very adamant in accepting to return to politics,” Nyagah told the Standard.

"After one-year pressure, I have fallen to that pressure with pleasure,” he added.

Nyagah cited the poor leadership and representation in his county as a factor that has also pushed him to contest for the law-making position at the upper house.

He noted that for the people to come to him, they must have had trust and faith in his leadership skills and he could not turn down the offer.

“I have listened with a keen ear, I have seen with disparity what happened in this county and I feel that it is only fair that if I have some energy, some ability to be able to counter some evils happening in the county,” he explained.

“It is also important to listen to the cries of the people when they come to you, there must be a reason as to why; because they are seeing you as their saviour to a certain extent and I had no option but to accept.”

Nyagah emphasized that his political experience accords him with what it takes to battle for the second-highest seat in the county.

“I was requested to specifically stand for the seat of Senate and that is the one I specifically accepted considering it is the mature seat for people who have a bit of wisdom,” he stated.

Nyagah is hoping to run on a United Democratic Alliance (UDA) ticket to succeed the incumbent senator Peter Njeru Ndwiga.

Nyagah makes a political comeback after he lost during the nominations of PNU in 2007 to Simon Mbugua and defected to the late Kalembe Ndile’s led The Independent Party of Kenya (TIP).

He had served as Gachoka Constituency MP between 1997 and 2002 before being elected at Kamukunji Constituency (2002-2007) under National Rainbow Coalition (NARC) party.