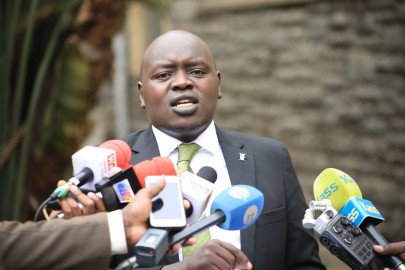 UDA-allied legislators have vowed to file a petition in court if the contentious Political Parties Amendment Bill is passed by the Senate.

On Tuesday ahead of the special sitting convened by Senate speaker Kenneth Lusaka to debate the bill, Nandi Senator Samson Cherargei stated that the Deputy President William Ruto-led camp is determined to ensure that the law is not used in the August polls.

“If they push through, as UDA, we have indicated before that we will move to court to challenge this

unconstitutional and illegal amendment and ensure that this law shall not be used in the upcoming nominations,” said Cherargei.

The senator further said that following UDA’s newfound union with the Amani National Congress and FORD-Kenya, they were confident they had the numbers to overthrow the bill.

“We are ready and we have numbers, as we talk now we have a number of delegations. With the UDA-ANC-FORD-Kenya partnerships we are now taking it to another level,” Cherargei stated.

“We are also in talking terms with Wiper because they are also uncomfortable with the provision of a timeline that has been reduced to four months to deposit the coalition agreement.”

Senators will from Tuesday through Thursday debate the bill following its approval by the National Assembly in December.

The Senate Justice and Legal Affairs Committee (JLAC) which held a two-day public participation exercise last week will be tabling a report detailing its findings.

The Independent Electoral and Boundaries Commission (IEBC) is among those who have taken issue with the bill.

It warns that the timelines were not aligned with the electoral timelines.

IEBC, in its presentation to the JLAC noted that the provision mandating the registrar of political parties to certify the names appearing in party lists usurped its role.

The bill has put Azimio La Umoja-allied senators against those allied to DP Ruto, with the Azimio camp keen on ensuring the bill is hastily passed to facilitate the setting up of the Azimio La Umoja coalition party under the leadership of ODM leader Raila Odinga.