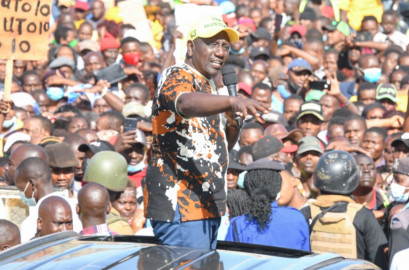 DP William Ruto addressing a rally during his tour of Kajiado County on January 13, 2022. PHOTO | DPPS

Deputy President William Ruto has continued to rally supporters behind his bottom-up economic model campaigns as he seeks to have his stab at the forthcoming presidential elections.

The deputy president, speaking during a tour of Kajiado County on Thursday, called on area residents to buy into his hustler narrative.

Ruto emphasized that his agenda had the backing of international leaders and was well-proven as the ultimate solution to the problems affecting the country.

“Even the President of USA Joe Biden accepts that the trickle-down economic model has failed, that is why even America today is adopting to the bottom-up economic model.”

DP Ruto sought to assert that his proposed economic model would ensure that all Kenyans equitably benefit, with a focus on those in the lower social class.

At the same time, he faulted his political rival Raila Odinga’s Azimio la Umoja agenda saying it was only for the wealthy in the country and will lead to tribal division rather than uniting Kenyans.

Ruto consequently downplayed his competitors alleging that they had nothing to show for the region’s projects while he himself had a well-laid track record of developments.