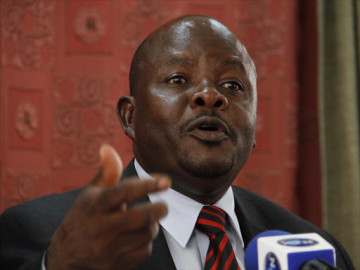 Mumias Member of Parliament Benjamin Washiali speaks in a past presser. PHOTO|COURTESY

Washiali revealed that he wants to pave way for new leadership in his constituency and explore other life-challenging opportunities aside from elective positions.

In a move rarely witnessed in the country, the incumbent lawmaker announced towards the end of 2021 that he would not battle to retain his seat despite his popularity in Mumias.

“I felt I should give someone else an opportunity, I have had my time and strongly feel that I do not run out of ideas to stick on this position as if we do not have other people from Mumias who can try their bit,” the MP said in an interview with KTN.

“The reason as to why I want to exit in the parliamentary seat is because I have been in parliament for the last 15 years. I have my small company in clearing and forward.”

The legislator rubbished claims that he was not a favourite candidate to clinch the seat and that his decision to quit the race was informed by anticipation of failure. He claimed that no aspiring candidate would match his popularity.

“I am not giving up my seat because am unpopular; if you went to fair rating, my rating is not very bad, am not saying am automatic but my rating is the highest, I am the top-rated candidate if I was to run for 2022,” he assured.

Washiali further proposed that lawmakers in the country should emulate his ‘noble act’ by giving an opportunity for other people to carry the mantle of leadership.

The MP went forth to censure power-angry leaders who have long been stuck in the same positions for over 15 years stating that if it is not for their own selfish ambition, they should opt for others to succeed them.

He hinted at a two-term period employed for the Presidential and Governor positions to be extended to National Assembly, Senate or County Assemblies.

“We have made a law for the president and governors to retire after two years. I think it is common sense even for my colleagues in parliament and not only in parliament and county assemblies that after you have done three terms and taken 15 years to do the same thing,” he said.

"I also don’t think anybody reasonable and thinking in a sound manner would want to still retain the position if his interest is not monetary," Wasiali added.

Washiali told off those alleging he was seeking a senior elective position assuring he had no interest in vying for other seats but would rally his support behind Deputy President William Ruto.

He noted that his support for the DP was purely driven by his belief that Ruto would transform the country and end political dynasties in the country.

“I am also not running for any other seat anywhere else. I will support my presidential candidate and any other political candidate in UDA. I want to support UDA since I am the chairman of Kazi ni Kazi to form a party that would impress," he said.

However, Washiali said he was open to any other position of leadership offered in case UDA triumphed in August.

"Should we succeed, we are hopeful, I can serve Kenyans in a different position, should that happen. If it doesn’t happen, we will thank God for the opportunity,” he noted.

"If he thinks I can play a role, I am okay with that but am not giving any condition to anyone."

While speaking on ANC’s Musalia Mudavadi factor in the presidential elections, Washiali implored Mudavadi to put the community interests on the map as he pushes his State House bid.

“Musalia has an advantage over me and I may not want to bring him down. He must look at what the community would benefit against his own personal interests,” Washiali said.

“Whatever decision he takes, it should be a decision which empowers the community economically; he is independent-minded.”