New coach for Everton but the defeats continue unabated 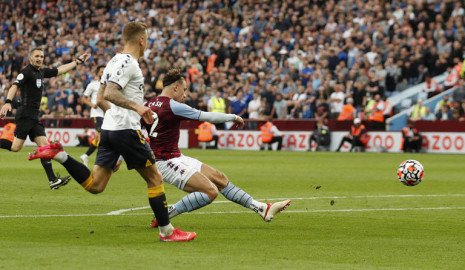 The Scotsman stepped in following the sacking of Rafael Benitez but the move did not immediately produce the desired response as Emiliano Buendia's header in first-half added time settled a scrappy encounter.

The Scotsman stepped in following the sacking of Rafael Benitez but the move did not immediately produce the desired response as Emiliano Buendia's header in first-half added time settled a scrappy encounter.

The goal was followed by disgraceful scenes as celebrating Villa players were struck by objects thrown from the crowd.

Everton will feel their second-half pressure, based on an aerial bombardment, should have brought some reward as Dominic Calvert-Lewin turned Anthony Gordon's cross over from close range and Ben Godfrey's header was scrambled off the line by a combination of Tyrone Mings and keeper Emiliano Martinez.

It leaves Everton with only six points from their last 42, searching for a new manager, and sitting uncomfortably close to the relegation zone of the Premier League.

Everton owner Farhad Moshiri and chairman Bill Kenwright were banking on a 'bounce' from the appointment of Ferguson in order to revive a season sliding into danger and which resulted in Benitez's sacking.

It did not work on a flat afternoon at Goodison Park, which ended with fans staying behind on the Gwladys Street End chanting "sack the board" and waving banners of protest.

A plane also flew overhead before kick-off demanding the removal of Kenwright, who was also a target for abusive chants after the final whistle.

This is a genuine crisis for Everton as they not only face a relegation battle but must also make yet another decisive decision on their next manager.

Even the atmosphere inside Goodison Park was not lifted for long by the talismanic Ferguson's presence on the touchline, with Everton failing to produce a shot in the first half.

It was a grim spectacle, outlining exactly why Everton's one win in 14 league games has led to growing unrest among the fan base.

Everton improved after the break and threatened an equaliser but the danger was based largely on a succession of long balls rather than any guile, although Demarai Gray and substitute Anthony Gordon did their best to provide creativity.

However Everton came up short and once more face a pivotal moment, one they cannot afford to get wrong again.