Covid pandemic 'nowhere near over,' WHO says 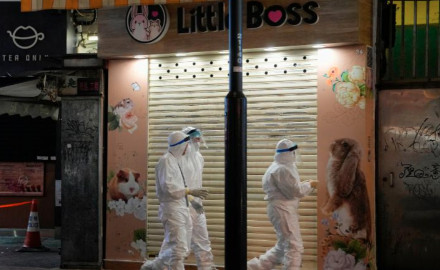 Government workers investigate a pet shop that closed after some pet hamsters tested positive for the coronavirus in Hong Kong on January 18.

How will the pandemic end? Nearly two years since it was officially declared by the World Health Organization (WHO), we're still no closer to knowing the answer.

The highly transmissible Omicron variant has swept the globe since it was first detected in South Africa in November. But the fact that it is less likely to cause severe disease than previous coronavirus variants has led to heavy speculation over whether it might mark a turning point, or a conclusion, to the pandemic.

WHO Director-General Tedros Adhanom Ghebreyesus poured cold water on that theory on Tuesday, saying: "This pandemic is nowhere near over."

Omicron is continuing to infect the world at a startling speed, with more than 18 million cases reported last week alone, according to WHO. The number of Covid patients in the United States is at a record high and continues to climb, overwhelming hospitals. From Australia to Germany, infections are leaping to never-before-seen levels, putting a significant strain on health care systems.

"Omicron may be less severe -- on average, of course -- but the narrative that it is mild disease is misleading, hurts the overall response, and costs more lives," Tedros said. "Make no mistake, Omicron is causing hospitalizations and deaths and even the less severe cases are inundating health facilities. The virus is circulating far too intensely with many still vulnerable."

The same message was echoed a day earlier by Dr. Anthony Fauci, US President Joe Biden's top medical adviser. Fauci was asked at the online World Economic Forum if the coronavirus may this year transition from pandemic to endemic level, when a disease has a constant presence in a population but is not affecting an alarmingly large number of people. He replied: "I would hope that that's the case, but that would only be the case if we don't get another variant that eludes the immune response."

Fauci added that the world is still in the first of what he described as five pandemic phases: "the truly pandemic phase," where the world is "very negatively impacted," which is followed by deceleration, control, elimination and eradication.

And yet some governments seem to be ignoring such phased steps, resigning themselves to the virus ripping through their populations indefinitely. According to their logic, "We need to learn to live with this virus." But what exactly does that look like, and how long will it last?

In some European countries, pandemic strategy continues to down-shift toward fewer mitigation measures, reduced quarantine periods and fewer restrictions on travel. In fact, in places such as Spain, the thinking is to treat Omicron more like the flu — despite public health officials, including WHO, cautioning against that approach. "I think we have to evaluate the evolution of Covid to an endemic illness, from the pandemic we have faced up until now," Spain's Prime Minister Pedro Sanchez said last week.

In Britain, which flirted with a controversial "herd immunity" strategy at the start of the pandemic and has continued to raise eyebrows with its "keep calm and carry on" attitude to the virus, an Omicron spike threatened to put the country's health service on a "war footing." But now that the wave seems to have crested — 93,890 new cases were reported on Tuesday compared to 129,544 on the same day last week — the limited "Plan B" restrictions imposed in December, which included masks on public transport, will be eased next week.

"Decisions on the next steps remain finely balanced," Downing Street said in a statement, which emphasized that "the Omicron variant continues to pose a significant threat and the pandemic is not over."