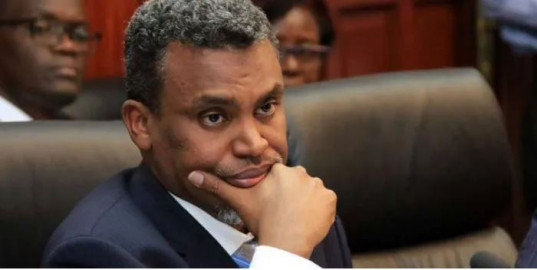 Noodin Haji, Kenya's Director of Public Prosecutions, has reiterated that investigations into the 'Covid Billionaires' corruption scandal at the Kenya Medical Supplies Authority (KEMSA) are still ongoing and has urged Kenyans to be patient.

Speaking to Citizen TV on Thursday, the DPP stated that his directorate is gathering information to strengthen their prosecution.

“We have reviewed the files jointly with the Ethics and Anti-Corruption Commision (EACC) and returned them to the commission, there are certain things that need to be covered and once that is done we will be able to move,” said the DPP.

“Investigations and preparations into prosecution are not things that can be done overnight. To get a simple corporation  involving other jurisdictions in terms of tracing the money, for example, takes time,” he added.

Haji called on Kenyans to keep calm and give the directorate ample time to work on the case, saying there is a high likelihood to lose the case if it is rushed.

“Kenyans need to understand. If we hurry some of these cases then we will be hoodwinking Kenyans that we are doing something but at the end of it it will come out clearly that the cases were not ready,” stated Haji.

He further added that the DPP and EACC are not just seeking prosecution of the corrupt individuals, but also recovery of money lost through the mega scandal.

“The kind of evidence that we can produce will make our case stronger and will be able to allow us to follow the money,” he noted, adding: “For a long time the practice has been taking the case and just concentrating on the individual involved, and they end up in jail, but their family is enjoying the proceeds of crime.”

“These are some of the things we have agreed jointly with EACC that have to be relooked at. We are asking for patience.”

Kenya lost Ksh.2.3M in the KEMSA procurement scandal according to a September 2020 report by Auditor General Nancy Gathungu.