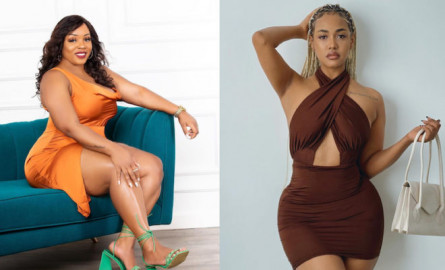 Socialite Risper Faith has come out to expose singer Tanasha Donna for allegedly failing to pay a Kenyan cosmetic surgery company that she had referred her to.

In screenshots of messages sent by Risper to controversial blogger Edgar Obare, the socialite revealed that Tanasha failed to meet her end of the bargain to share a post on her social media after undergoing the surgery and instead went off the radar.

“The company was to work on her fat transfer to her buttocks and hips. I connected them and they arranged for surgery. The surgery went well and she got her perfect dream body,” wrote Risper.

“Later on after she was healed, she was supposed to post on her Instagram and say who did it and how it went. They even hired a team of professional videographers to film everything. Two weeks after the surgery, she went MIA.”

Risper disclosed that in addition to not making the post and not completing her after care, Tanasha also failed to make a Ksh.850,000 payment that was promptly charged by the facility.

“Mark you; she didn’t even finish her aftercare, which is risky, so they decided to charge her Ksh.850, 000 since she didn’t post anything. Up to this date, she has never paid anything and I feel bad because I am the one who introduced her and promised them she’s a nice girl and would post,” she added.

Risper explained that the 'Gere' hit maker had previously reached out to inquire about her own surgery experience and the place she got it done.

The former ‘Nairobi Diaries’ cast member added that, coincidentally, the cosmetic surgery company was at the time in search of another influencer to work with when Tanasha came calling.

The procedure was going to be done without any payment under the condition that Tanasha would thereafter share a post on her social media, which she did not do.

Tanasha has since taken to her Instagram stories to respond to the allegations, albeit subtly, claiming they are not true.

“Once they realize hating is not working, they start telling lies,” she wrote.