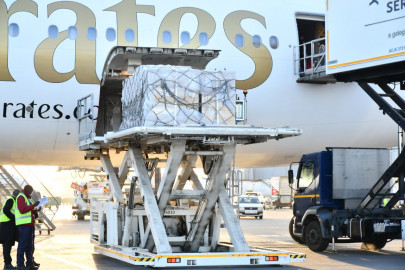 The final batch of special syringes to be used for Pfizer vaccines arrived in Kenya on Sunday morning aboard Emirates airline.

This now completes the batch of 2.2 million special syringes from the United States government which will be used in administering the vaccines.

The ministry of Health says it will now roll out Pfizer vaccination starting Monday.

This is expected to boost vaccination programme which aims to have 10 million Kenyans fully vaccinated by December.

Kenya received the first batch of the special syringes on Saturday.

The syringes which were received by Ministry of Health officials landed at the Jomo Kenyatta International Airport (JKIA) at 1.30pm aboard Qatar Airlines, and were later transported to the Central Vaccine Stores in Kitengela.

The total amount of special syringes which were expected by the government were 2.2 million.

The uptake of the second dose among those who received their first dose was at 31.6%, with proportion of adults fully vaccinated was 3.4%.

Health Cabinet Secretary Mutahi Kagwe said the government is working towards vaccinating a targeted population of 27,246,033.