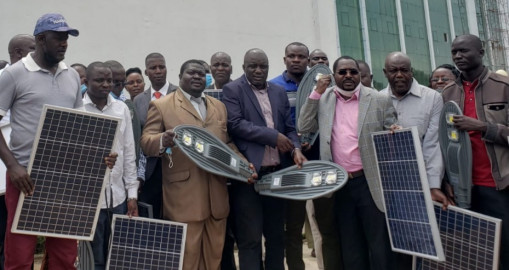 Hamptons Hospital has donated solar streetlights to light up 50 market centers and schools in Matungu region of Kakamega County.

The streetlights were received at Hamptons Hospital at Mwale Medical and Technology City (MMTC) by Peter Nabulindo of Matungu , who was accompanied by over 100 community leaders from Matungu.

The event follows the meeting early this month between Nabulindo and MMTC team, where MMTC committed to donating 50 solar streetlights, which have an assembled value of Sh15 million.

“We are glad to work with Mwale Medical and Technology City. These solar lights will end darkness at our markets and it will allow a 24-hour economy,” Nabulindo said.

The family members with NHIF cards will then be treated at Hamptons Hospital without paying extra payment charges.

Hamptons Hospital will also open satellite centres and equip clinics in Matungu in order to provide high quality healthcare access to every resident of Matungu.

Hamptons hospital is part of the Sh200 billion MMTC and has been open since July 2019.

All Kakamega residents with NHIF cards are treated without paying extra payment charges.

Since its initiation in 2015, MMTC has received widespread admiration from a majority of both local and foreign visitors who have toured the project to witness the significant progress being implemented across its project phases.

Unlike several similar high-end projects which have often been dogged with controversy in Kenya, MMTC has not experienced any major challenges which may have led to its suspension.

The project's success has been attributed to its model of reaching out to locals within the project perimeter and establishing key contacts and relationships.

This has seen most of them donate huge tracts of ancestral land to the project to benefit them and MMTC.