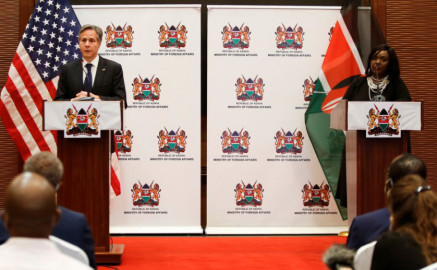 U.S. Secretary of State Antony Blinken reiterated calls for an unconditional ceasefire in the Ethiopian conflict on Wednesday on the first leg of an African trip which will take in Kenya, Nigeria and Senegal.

Blinken also appealed to Sudan's military leaders to free prisoners taken in the coup there last month and to return to the path of democracy, saying some of the financial assistance that was frozen might be restored if civilian leadership returned.

The war in northern Ethiopia, the coup in Sudan and Somalia's long-delayed elections dominated the agenda, along with climate change, as Blinken and Kenya's foreign minister Raychelle Omamo addressed the media in Nairobi.

Blinken described Ethiopia's year-old war as "a growing risk to the unity and the integrity of the Ethiopian state".

He pledged support for mediation efforts by former Nigerian President Olusegun Obasanjo, now the Africa Union's High Representative for the Horn of Africa, and said there was still time for a ceasefire to succeed.

"I strongly believe there is an opportunity and an absolute necessity for all the parties to stop, to talk, to move back, for humanitarian assistance to flow and also to be at the table together," he said.

He also urged rebellious Tigrayan-led forces to stop their threatened advance on the Ethiopian capital Addis Ababa - where the AU is headquarted.

Blinken arrived in Nairobi on Wednesday for his first Africa trip following the COP26 climate talks in Glasgow, where poorer nations called on rich governments to do more to help them combat climate change.

He praised Kenya for getting 90% of its energy from renewable sources, saying it presented a global model.

Omamo said Kenya looked forward to working with the United States to plug the climate financing gap, saying that poorer countries who did not create the problem paid the greatest price for global warming.

On Thursday, Blinken will visit Nigeria - Africa's largest oil exporter - to meet President Muhammadu Buhari, whose government is battling an Islamist insurgency in the northeast and mass kidnappings by armed gangs in the north and northwest.

The two are expected to discuss possible security assistance from the United States, a source in the Nigerian presidency told Reuters. In July, Nigeria received its first six A-29 Super Tucano planes four years after the United States agreed to sell the light attack aircraft to fight insurgents.

But analysts say Buhari has made little progress tackling corruption that has eroded the country's infrastructure or abuses by the security services.

Blinken's final leg is Senegal, considered one of Africa's most stable democracies, where the focus will be on leaders and female entrepreneurs.