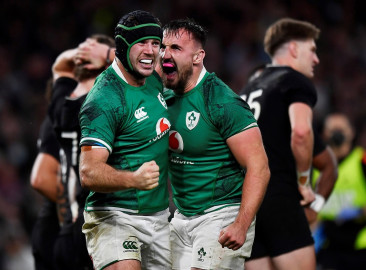 Ireland dominated from start to finish to topple New Zealand 29-20 at an electric Aviva Stadium on Saturday and make it three wins from the sides' last five meetings with another superb performance against the All Blacks.

Ireland, who had never beaten New Zealand until five years ago, were hammered 46-14 in their last clash two years ago but tries from James Lowe, Ronan Kelleher and Caelan Doris delivered a thoroughly deserved victory.

"It doesn't happen by accident, we've been building towards this and the most important thing now is that it's a starting point, not a peak," Ireland captain Johnny Sexton told a news conference.

After the first full house at the Aviva Stadium in 21 months tried to drown out the Haka with a rendition of 'The Fields of Athenry', Ireland responded by showing their intent to play the kind of fast-paced rugby that hit Japan for 60 points last week.

They were not afforded the same kind of space and it was the All Blacks who came closest to opening the score through the electric Will Jordan before Codie Taylor's yellow card for a high tackle on Sexton handed the hosts the initiative.

That was to be New Zealand's last attack for most of the half as Ireland took advantage with ruthless precision, going for the corner rather than the sticks with the resulting penalty and when their pack could not quite make it over, the ball was spun out wide for Lowe to score against his native New Zealand.

Ireland remained camped in the All Blacks' half, even when the visitors returned to their full complement of players, and Sexton said the team couldn't believe they wound up trailing 10-5 at the break after New Zealand took the lead out of absolutely nowhere.

With Ireland regrouping from a disallowed Tadhg Furlong try, Dalton Papalii broke from the back of a lineout into a gaping hole in the Irish defence and Taylor was beside him to finish.

Ireland again came within inches of scoring just before the break, this time through Sexton, but the resolute All Blacks went into halftime ahead having make some 160 tackles to Ireland's 37 in the first 40 minutes.

The onslaught continued in the second half and the dam broke when Leinster hooker Kelleher's 44th minute try levelled the score.

The early defensive effort was taking its toll on New Zealand, who also lost flyhalf Beauden Barrett to a head injury in the first half, and man-of-the-match Doris broke through to add a third try shortly afterwards.

Sexton's first conversion of the day and a quick additional penalty put the hosts 20-10 in front before Jordan's 17th try from 11 caps and a disallowed effort from Akira Ioane made for a tense finish.

But Ireland stood firm with replacement flyhalf Joey Carbery knocking over three late penalties, one from the halfway line, before the packed house erupted on the final whistle.

"I thought they thoroughly deserved their win, it was a game they came out and played incredibly well, held the ball for long periods. I was really impressed with them today," New Zealand coach Ian Foster said.