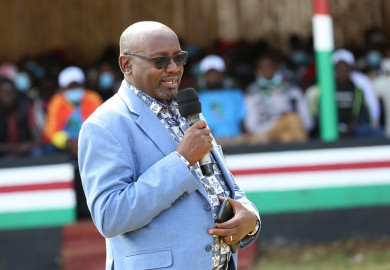 Athletes training in Kapsabet, Nandi County have called for more local races to be staged in the country.

Jepchirchir was speaking at the final meeting of Athletics Kenya (AK) consultative forum that was held today in Kapsabet.

“Local races play a big role in the development of an athlete. I I also competed in local events before I finally made it to the international stage. It is a real challenge for an athlete to make it without local events and thus it is important for our counties to hold races to promote young athletes,” said Jepchirchir.

Her sentiments were echoed by another athlete Benjamin Bitok who said many upcoming athletes careers have stalled due to lack of competitive events in the country.

“I want to appeal to counties especially in the North Rift region where we have many athletes to consider hosting more events. We have so many athletes and it is not possible for all of them to secure races outside the country,” said Bitok.

Korir however warned organisers who exploit athletes as he revealed that AK is the sole body mandated to sanction athletics events in the country.

“As a federation we are ready to support as many local events as possible. Recently we had the inaugural Nakuru City Marathon and that is the direction we want to go. It will be even more beneficial to our athletes to compete locally than abroad,” said Korir.

Nandi County governor Stephen Sang who addressed athletes at the forum said his government is planning to host an annual race to support local athletes.

The Month-long consultative forum came to an end today after traversing 15 centres across the country as AK sought to find out the challenges troubling athletes.

“Our team that has been going around the country will be going for a retreat to compile each and every issue raised by the athletes across all the centres. We will be engaging all the relevant stakeholders in our resolve to make the sport better,” said Korir.