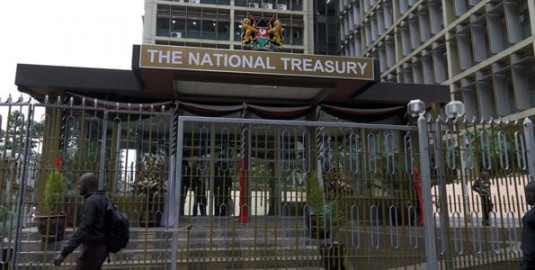 The National Treasury overshot its interest payments on domestic loans by Ksh.7.5 billion in the first three months of the fiscal year to September 30.

New data from the exchequer shows the domestic interest payments at Ksh.101.1 billion in the three months against a target of Ksh.93.7 billion.

In contrast, receipts towards the payment of interest on foreign loans fell by Ksh.316 million in the same period with the foreign interest billing in the three months at Ksh.30 billion.

Pension payments in the quarter have followed a similar trajectory easing by Ksh.1.9 billion to Ksh.27.7 billion against an initial target of Ksh.29.6 billion.

The wages and salaries bill has likewise fallen by Ksh.5 billion from initial targets to Ksh.126.5 billion.

The domestic interest payments in the three months stand at an estimated one-fifth of ordinary revenue in the same period.

This means that for every Ksh.100 in ordinary revenue -- taxes and appropriations in aid (A-i-A) -- Ksh.20 has been deployed towards the payment of local debt by the National Treasury.

In contrast, foreign interest costs are shy of six per cent of total ordinary revenue which stood at Ksh.506.3 billion across the three months.

This means that only about Ksh.6 from ordinary revenue is being channelled towards the repayment of foreign debt.

According to data from the draft budget policy statement (BPS), Kenya is expected to use a total of Ksh.553.4 billion to settle domestic accruing interest in twelve months through to June 2022.

In contrast, foreign interest payments will only eat up Ksh.134.5 billion of the government cake across the 2021-2022 fiscal year.