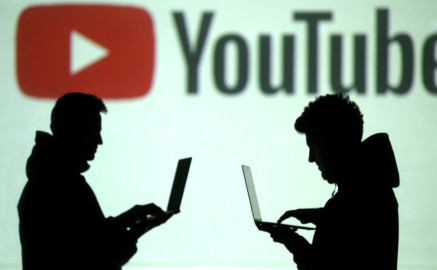 FILE PHOTO: Silhouettes of mobile device users are seen next to a screen projection of Youtube logo in this picture illustration

There is nothing glamorous about being a YouTuber in Rwanda, says John Williams Ntwali, whose channel Pax TV is a year old. The pay is poor, the threats frequent and the risk of prison all too real.

Ntwali has been arrested multiple times during his two-decade career as a journalist, but now fears that even YouTube, which had established itself as a rare outlet for critical reporting in Rwanda, is losing ground to an authoritarian government.

"We are leaning towards the closure of YouTube channels, not by shutting down YouTube or the internet but by imprisoning those who work on YouTube," he told AFP in an interview.

YouTubers who discuss beauty, sports or shopping have little to worry about, but those who focus on politics and current affairs are in an increasingly precarious position, he said.

"It's getting more restrictive."

Unlike many YouTubers around the world, the 40-something is careful not to share any personal information about himself or his family, for safety reasons.

In fact, he rarely appears on Pax TV, which has secured 1.5 million views and is nicknamed the "voice of the voiceless" for its interviews with critics and dissenters in the national Kinyarwanda language.

The channel, which has 15,000 subscribers, features interviews with figures such as Adeline Rwigara, who accused the government of harassment. She previously accused the authorities of killing her husband Assinapol Rwigara, a high-profile industrialist who fell out with the ruling party and died in a car accident.

The channel also interviewed the Belgian lawyer of Paul Rusesabagina, the "Hotel Rwanda" hero turned outspoken government critic who was sentenced to 25 years in prison in September in what global rights groups branded an unfair trial.

"We want to talk to every citizen, we do investigative journalism, but we do it to advocate for human rights," Ntwali said.

Several of his former compatriots are in jail while other YouTubers are increasingly afraid to broach controversial subjects.

"It's passion. It's dedication. We live hoping that one day it can improve."

President Paul Kagame has ruled Rwanda with an iron fist for nearly three decades, ever since his rebel army stopped the 1994 genocide which left some 800,000 mainly ethnic Tutsi dead.

While Kagame has won praise for bringing stability and economic growth to Rwanda, he has also come under fire for cracking down on political freedoms.

The country is ranked 156th out of 180 countries for press freedom by media watchdog Reporters Without Borders.

As media censorship has grown, forcing independent outlets to shut down, YouTube has stepped into the vacuum, its popularity receiving an unexpected boost when COVID-19 lockdowns left Kigali residents housebound.

Once a video is uploaded, it has a long life, often shared several times before anyone attempts to have it removed.

Furthermore, Kagame's government cannot go after the Google-owned platform without risking the wrath of the Silicon Valley giant, which could block access to its other services in Rwanda, dealing a blow to the economy, Ntwali said.

Nevertheless, in recent weeks, speculation has mounted that the government is in discussions with Google about shutting down a number of YouTube channels.

Neither Google nor the Rwandan authorities responded to AFP's requests for comment on the reports, which follow a string of arrests of prominent YouTubers in recent months.

In November, star YouTuber Dieudonne Niyonsenga, better known by his online persona Cyuma ("Iron"), was sentenced to seven years in jail after being found guilty of forgery and impersonation.

Weeks earlier, Yvonne Idamange, a mother of four with a large online following, was jailed for 15 years for inciting violence online.

Aimable Karasira, a university lecturer with a YouTube channel, was arrested in June and charged with genocide denial, a serious crime in Rwanda.

The Rwanda Investigation Bureau in October urged citizens to be wary of social media commentators seeking to "undermine national security," warning of arrests.

According to Human Rights Watch, "Rwandan law allows for overly broad and vague limitations on free speech" which pave the way for the "abusive prosecution" of YouTubers and other government critics.

In just a year, many of Rwanda's top YouTubers have been silenced, and while Ntwali says he is careful not to publish anything that is "in contradiction with the law", he knows his days online are numbered.

"It is inevitable," he said.

"When you are an independent journalist, in the truest sense of the term, you are a candidate for prison."