Do not blame drought for cases of insecurity, Laikipia leaders tell residents 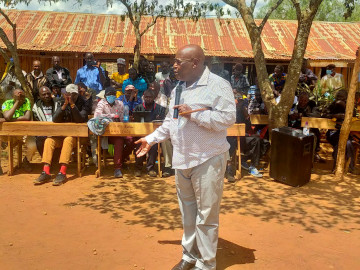 As the government continues to enhance restoration of peace and cohesion among various communities living in the troubled Ol-Moran area in Laikipia County, a section of leaders from the region have called on residents and pastoralists not to blame drought for the perennial cases of insecurity.

Comprising former National Assembly Speaker Francis Ole Kaparo, Laikipia North Member of Parliament Sarah Lekorere and Laikipia County Commissioner Joseph Kanyiri, the leaders observed that there were many parts of the country experiencing drought and hunger, yet people in those areas were not fighting.

Some residents of Laikipia West and North constituencies, where cases of illegal grazing and livestock thefts are rampant, have used drought as scapegoat to the unending conflict, but the leaders say it is more than just drought.

The three were speaking Sunday during a series of peace meetings held at Magandi and Naibor areas in Laikipia North, bringing together residents, community elders, local leaders and government officials to chart the way forward on ending the conflicts.

The leaders called on the relevant authorities and leaders to wake up to their responsibilities, while urging elders and residents to open up during dialogue forums in an effort to identify the real causes of conflict in the area.

Speaking at the forum, Mr. Kaparo called on the government to control the movement of pastoralists from other counties to Laikipia in search for pastures in order to avert incidences of insecurity in Laikipia.

He claimed that local herders could not be allowed to move to the neighbouring areas since they have tainted their image and hence feared that they could extend the conflict to places where they move to.

Meanwhile, MP Lekorere called on residents to respect their neighbors and take pride in the value of good neighbourliness.

Laikipia County Commissioner Joseph Kanyiri, on his part, added that there was a need for elders to be instruments of peace and underscored the need for sincerity in propagating peaceful coexistence.

He noted that the government was committed to support residents from areas hard hit by drought with relief food saying already the most affected areas have been profiled and are receiving their rations in due course.