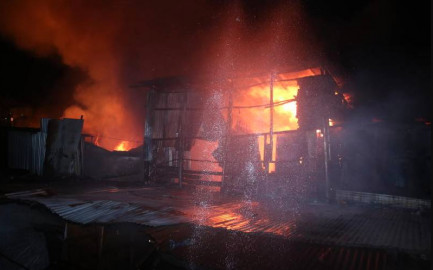 A section of Gikomba market during a past fire. PHOTO | COURTESY

Over 2,000 traders from Gikomba 42 market are appealing to the government to investigate and bring to book those responsible for the frequent fires at the market, the latest inferno being Sunday night.

The traders who are rebuilding their stalls also want the government to fast-track the installation of CCTVs and floodlights in the market to help curb the vice that has led to losses running into millions of shillings.

This year alone, more than eight fire incidents have been recorded in the area begging the question, who is burning sections of the Gikomba market, for what purpose and why is the government unable to stem these devastating flames?

The section which has over 2,000 traders is just next to Jua Kali market where there was an inferno on Mashujaa Day .

John Mwange has been a trader at the market for the last 26 years, he told Citizen TV that the market which serves millions on a daily basis started experiencing fire incidents in 2010, but the frequency of fires in the last five years has seen many traders like him raise the red flag.

Mwange is of the opinion that security guards hired to protect the stalls should also provide answers as they are always around when it happens, but fail to help police to nab those who might be involved.

This is not the first time Gikomba market has been on fire. A police source told Citizen TV that they have recorded eight fire incidents at the market, this year alone.

Citizen TV has also established that there have been more than 15 fire incidents at Gikomba market in the last five years.

A directive by President Uhuru Kenyatta in October 2017 to investigators to bring to book those who could be involved did not yield much.

On August 6 this year, Interior Principal Secretary Karanja Kibicho who toured Gikomba market after a fire incident had directed that floodlights and CCTVs be installed within seven days.

But that promise came a cropper. The government is now in the process of building a second six-storey modern market in the area after another one accommodating over 900 traders was built which traders say will be a solution to the perennial fires.

Even as some traders raise concern over frequent fires, those at Gacucu section are worried over a recent ruling by the court allowing NMS to take over their space for expansion of Pumwani Health Centre and a road connecting to the health facility.

Buruburu DCIO Jackson Muriuki who is leading investigations has confirmed they are at an advanced stage, though they are yet to arrest any suspects.